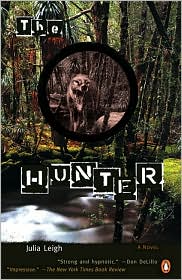 I read Julia Leigh’s Disquiet last year and it was so brilliant and haunting that I’ve been desperate to read more of her work. (I have a thing for brilliant and haunting.) In my scouring of the internet – an by scouring I mean one click on Google – I found that Disquiet was her second novel/novella. Her debut novel, The Hunter, surfaced way back in the year 2000. Remember 2000?

My experience with reading The Hunter was similar to submerging myself in water, the din and hum of the outside world suddenly silent. I was embraced, suspended. Leigh’s writing is eloquent and peaceful, even when her subject matter is not.

As you can guess The Hunter is about, well, a hunter. A man calling himself Martin David – not his real name – is sent out to collect DNA from the last Tasmanian tiger or a thylacine. There is a lot of writing about the landscape of where this hunt takes place. I’m not at all familiar with Australia, New Zealand, or Tasmania. So much of this was lost on me since I don’t really need details about where they are. Man vs. tiger, I get it. Let’s just say Martin David – known only as M – has to go up a mountain, cross through a jungle and go over lots of rocks to get to where he is going. All this takes time. So he spends ten to twelve days up on the mountain, then comes down to rest, get supplies, etc. for two or three days before going back up the mountain to track the thylacine.

At his base camp, M boards with Lucy and her two kids, Sass and Bike. Best kids names ever. M needs a place to start from and go back to. He needs a place to shower and sleep in a bed, a place to go into town and get supplies, a place to rest. This isn’t so much a choice as a necessity. We all answer to someone and M works for nameless corporation who wants the harvested thylacine DNA. If M doesn’t come down off the mountain when he says he does he instructs Sass to call so-and-so and let them know.

What did he have to say to children? All the best children didn’t want to talk, or if they did want to talk, they only did so to gather information. They were spies, children, little murders. And adults, he remembers, were the enemy.”

Lucy is slowly recovering from the loss of her husband, a man who went up the mountain and never came back. The kids think their father is only missing, that one day he will come strolling back home. Lucy suspects the real truth, she knows in her bones that he is dead and has banished herself into a Ambien haze. She self-medicates into the abyss. She sleeps constantly while the kids have their run of the house.

Part of this is charming, Sass and Bike have decorated everything with bright stickers and paper cut-outs. The windows are painted with rainbows and they’ve glued colorful rocks to the furniture. Sass dresses herself as a neon-ballerina and Bike is a constant superhero. However, the larger picture is plaintive. Sass sneaks into her mother’s room at night and whispers to her in her sleep telling her about her day. Bike floats through his own life rather like a ghost instead of real boy. The kids live off rice and whatever vegetables they can get from the garden. And poor Lucy sleeps through everything.

She would sleep through it – her wound. She would wake up one day and her husband would be gone and her life would have fallen apart all around her and she would take a fresh look at it and see clearly what to do and how to fix it, all without feeling the slightest pain, only a memory of pain, a mere abstract. It was a brave move, perhaps a reckless move, placing all your money on sleep – she’d want to be lucky.”

The man known as M is a cold-blooded hunter and killer. He doesn’t care why he needs to kill this thylacine. What drives him is that the thylacine is supposed to be extinct, a myth. He prides himself on his patience. If she’s out there, he’ll get her. He’ll track her and find her and kill her. That’s what hunters do. On the other hand, tigers themselves are also hunters.

We all know that man vs beast stories end the same way – someone gets eviscerated. Thankfully, Leigh doesn’t mess with that formula. The hunter, M, is what he is. The tiger we cannot change. What Leigh gives us is the inner workings of a man on the hunt who finds himself tethered to a dysfunctional family. Sass still believes her father to be alive. So when given the responsibility of waiting for M, counting the days he’s gone, making a call if he doesn’t come back, Sass gets to reconcile some of her own grief. M goes and comes back, over and over, for months on end. Her own father went and never came back. M, out of boredom and more likely to fend off insanity, gradually begins to make an effort with Lucy and the kids. And just by his mere presence alone, Lucy begins to wake from her self-induced sleep.

We all know how the hunt is going to end, so that’s not what Leigh is counting on here. The real heart and calamity of The Hunter comes from the fraying bond that is holding Lucy and the kids together and how M effortlessly strengthens it. Don’t get me wrong, there are no happy endings here, The Hunter is beautifully crafted in tragedy. Julia Leigh gives us a story of strength and healing, but also never loses sight of the fact that danger and violence lurk in the shadows, laying low, ready to pounce.