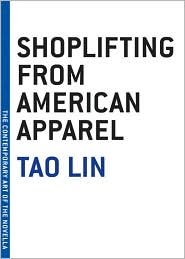 Of all the vapid crap in all the vapid world over, this is the vapid-est. I have not been able to get that word out of my head — vapid! vapid! vapid! — since I finished Tao Lin’s vapid “it” novella Shoplifting from American Apparel. A task completed over the course of an hour and a half that would have been better spent watching “16 and Pregnant.”

True story: I read more than half of this in the cafe at Barnes & Noble and knew I hated it. But I still bought it because I wanted to be able to loathe something physical. And I wanted to finish it, so I would have more reasons to not like it. Joke’s on me: Lin profits from my wrath.

Our hero Sam is a bored New York City writer/organic vegan restaurant worker who sleeps until 3 p.m., then IMs Internet friends on Gmail. These are gripping back-and-forths that frequently digress into “I’m so fucked.” “I’m so fucked, too.” “He’s so fucked.” Sam seems to like iced coffee, vegan dining, and his ex-girlfriend Sheila, although it’s hard to tell. This entire story? chronology? Twitter stream? is written in an eerie See Dick Run monotone. What passes as witty conversations seem to be of the “had to be there” variety. Sam is horseshit at shoplifting. The two times he does it he lands in the clink. Friends enter and exit scenes and new ones replace them but act exactly the same.

All the while, Sam has some sort of cult following of people who actually want to hear him read his words in public and talk about being fans of his work. Then things get super fun on a trip to Florida where everyone gets crazy and does antics.

There is part of me that hopes this book is some sort of elaborate bit of social satire. Like maybe, just maybe Lin is making a statement about blind worship, consumerism, and herd mentalities. Maybe Lin is sitting at home using Hotmail and Bing, craving gas station coffee and Olive Garden, laughing at his friend — the one who took blurbs from the reviews of people who didn’t like this book and tried to refute their claims. I’m not convinced Lin wouldn’t do this: he’s allegedly given readings where he repeats the same sentence over and over and over; he papered NYC with Britney Spears stickers. Why not write a blase novella, and then mock people who like it in the name of art? Don’t get me wrong — even if that is what’s going on here, I’d still hate it.

Another true story: I started reading Less Than Zero by Bret Easton Ellis in the same sitting. Strip these two tales, and they are similar concepts: 20-somethings wandering here and there, leaving a trail of pop culture bread crumbs. Yet Ellis doesn’t inspire ire. He makes me giddy. Nostalgia is a better brand of vapid. I prefer bored twits from the 80s to bored twits from the 2000s.

This book actually made me mad, and then more mad because I let it make me mad. And this book made me really glad that I don’t have any friends younger than 30. It also made me hate the Internet, cult followings, bloggers, and vegans, readers, and emo anything.