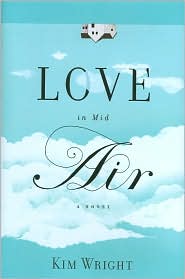 Love in Mid Air by Kim Wright isn't your mama's love's story. My mama's love story was The Thornbirds. Every year she'd shove my sister and me in our room when it came on tv, she was so set on being alone with it, like with a lover. I got around that; I snuck into her room one summer and read her copy while she was at work. Yes, titillating. With big-time passion and an epic romance sure to color hot pink a pre-teen's view of love.

I'm not sure mothers need to worry about daughters sneaking peeks at Love in Mid Air-at least not for the same reasons. The weekly sex of our artsy narrator, Elyse Bearden, isn't titillating. It's rote. It's everything we fear marriage and commitment will turn out to be. I suppose in some circles that's called realism. Maybe mothers should get their teenage daughters to read the book-it might scare them off of too-early sex, or sex altogether:

Now we usually have sex in the shape of an X, with our heads facing in different directions, our bodies touching only where mine overlaps his at the pelvis. I believe I saw this position in an old issue of Cosmo and at the time I thought it would be fun, something different, the sort of thing you try every once in a while. I brought the magazine to bed that night and Phil glanced at it and said, “Can do.” I'm not sure exactly when it became our default position, but now we move into it without consultation. You can't kiss in the X. You don't look into each other's eyes. But the advantage is that one person doesn't crush the other person's chest and neither of you has to hold your weight in that kind of unnatural push-up. I'm not sure at what point Phil and I realized how heavy we are.

Love in Mid Air is not about the epic love that turns your life upside down. In fact, it takes until page eighty-six before love feels absolutely tangible–and perhaps this delay only reinforces that love is something that grows and comes in all forms. Until then, our unhappily married Elyse fires off one glib comment after another-not just about her husband and her friends' husbands but also about her three closest friends and another woman who used to be a friend before she actually got divorced. If this is your kind of humor, you'll love this debut novel. If you wish for more depth in a narrator’s observations, you may wonder if women really are that judgmental of one another. Either way, the book edges close on a few occasions to confirming there's not enough love in the world, playing up the “why her and not me?” syndrome that pits woman against woman. The tension is real enough to pack a punch in the stomach.

This is a novel about female friendship. That's the love in mid air. Over the course of the story, female friendships rise and fall. They get on flights going in opposite directions. They disappear into a storm. They crash into a pretty, little suburb and beat each other up in an attempt to escape the conflagration:

So Jeff took the job down here and Nancy followed-I think that may have been one of the worst days of her life, but she'd never say that. She does what's expected of her. She joins every club and she chairs every committee. And she has tried to make her house, uncomfortably large and scantily furnished as it is, into a home. Kelly and I have always laughed at her, just a little bit, with all her crafts and rehabbing and cheap-chic decorating. The fact that she's painted her master bedroom with some sort of technique that she calls Bellagio faux glazing so that it looks like her bed is floating in a mottled pastel cloud. How she drives around with the back of her old Volvo station wagon full of fabric books and half-filled paint cans and some broken endtable she's rescued from a yard sale. They greet her by name at the Home Depot. But it makes me sad too. All the hours she sinks into that house, I know she's just trying to put her mark on something. She's trying to make it hers, the same way a dog pees on a tree, and it's not her fault she doesn't quite get it.

Wright’s debut novel exposes the nightmare of cookie-cutter suburbia and its effects on female friendships. At times, this nightmare is enough to scare me silly. In other moments, Wright keeps me in the palm of her hand with fine, richly-detailed passages that make me laugh out loud and scare the boogie-man away. A great book for wiling away some sunny hours this summer.

I moved to the Twin Cities in summer of 2009. Soon after I established a literary/art blog (inkslingerediting.com/blog). I work as a photographer and a freelance developmental editor. Examples of my photographic work can be found at www.catherinemicheleadams.com