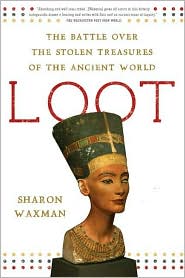 It will be a sad day if print journalists ever join dinosaurs and cavemen among the ranks of the extinct; sad for many reasons, of course, among them being we will no longer get books like Loot: The Battle over the Stolen Treasures of the Ancient World.

In Loot, former New York Times culture correspondent Sharon Waxman wades into the conflict surrounding ancient works of art taken from one country and brought to another, such as Greece's Parthenon Marbles, which are currently on display in England. She brings with her a natural curiosity and a great ability to clarify murky material. Both attributes help her cut through some of the tough questions clouding the issue of whether these artifacts should be returned: does art belong to a country or to all mankind? Does it matter if the art was stolen or legally purchased? How far back in history should our modern perspective reach?

Waxman is working with rich source material. Many of the stories behind disputed artwork read like pulp novels, from the swashbuckling Napoleon's rapacious plundering of Egypt to the still-unidentified cat thief who stole the centerpiece of the Lydian Hoard from a Turkish museum. Waxman improves upon this with substantial, insightful interviews with some of the central figures of this debate, like Egypt's antiquities minister Zahi Hawass. Her firsthand narration and investigations cast valuable real-life light on the morally righteous, if practically suspect, claims made by both sides.

On top of that, Waxman writes in a way that is informed and conversant in the topics at hand, but not stuffy or dry. All in all, Loot is a good example of the enduring value of print journalists. Hopefully, the adjective for that breed is “rare” and not “dying.”