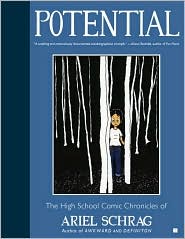 When we last left off, Ariel Schrag had just finished tenth grade. As good as her freshmen and sophomore years were to read, junior year is even better.

The first thing I noticed about Potential the second book in Schrag’s high school chronicles, is that her drawing skills vastly improved from sophomore to junior year. Gone is the amateurish, cartoons and in their place are drawings with real depth and emotion. The art here is really clever, not only does she depict various moods altered by chemicals (one kind of border represents being drunk, another represents being high) but she really packs a lot of emotion in her character’s faces. My favorite is the hot, young Alexis, one of Schrag’s girlfriends who is pretty but dumb. The girl is drawn with empty eyes. It’s a nice touch, and there are a lot of touches throughout. Another bit of art awesome is the dream sequences which become increasingly realistic compared to the comic aspect of daily life.

Anyway, junior high finds Ariel struggling again with her sexuality. At the beginning she declares herself a lesbian and yet midway through the book she’s trying to lose her virginity to a boy. Somehow she has decided that virginity can only be lost when a penis is inserted into a vagina. The episode where she goes on a road trip with her ex-boyfriend Zally on a quest to lose her virginity before she turns seventeen is awkward and hilarious and ultimately sad. It’s one of those situations where you feel bad for everyone involved, especially poor, poor Zally.

But the virginity escapade is a minor story thread to the big picture here, Ariel’s relationship with Sally, who is not quite sure she’s a lesbian. It’s a weird, conflicted, passive aggressive relationship, and it plays out against the backdrop of Ariel’s parents bitter, dissolving marriage. At turns you feel bad for Ariel, and at others for Sally. It’s one of those relationships that makes you thank your lucky stars you survived teenagedom and don’t ever have to go back.

What I like so much about Ariel Schrag’s High School Chronicles is that even though it’s told in the past tense, it’s a really close to the present past tense. It’s not as though Schrag is a 30something look back at her wonder years with a sense of nostalgia and assigning significance to the events after the fact. Instead everything’s presented with equal weight, like a teenager would, and its up to the reader to place significance on the material. While presenting the chronicles this way makes the reader wade through some vapid fluff to get to the good stuff, the fluff really isn’t so bad. Next up, I’m tackling Likewise which chronicles Schrag’s senior year.