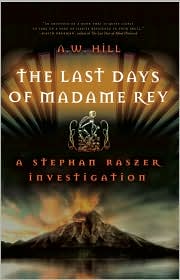 The Last Days of Madame Rey is a perfect companion to A. W. Hill's Nowhere-Land. Both feature the daring PI Stephan Raszer, and although Madame Rey came first, it has just been newly released in a paperback with brand-new cover art. Both reads are intense, but Madame Rey has an earthy mother-nature tone where science and religious dogma amalgamate. It will have its readers at the edge of their seats; instinctively checking the length on their tailbones.

'Humans of your type retain the vestige known as the coccyx. This is your mark ? the link to your fellows and to creation. Something happened, however, out on the savannah to those earliest and most eager of predators. The Stumps, you see, have no affinity for life in the trees. The truth is they do not have much affinity for life.'
'Are we still on the 'parable?' Raszer asked. 'Or can I spot these?Stumps?on Sunset Boulevard?'”
-pg 310

Hill's complex and intense story-telling make it hard to describe this novel without going into a 30 minute synopsis and that is one of the reasons it is so good. Private Investigator Raszer is tracking another lost soul. This time it is the son of a prominent Jewish lawyer who gets caught up in a Neo-Nazi supremacist group looking to turn the axis of our globe to point 'true north'. Their target is Mt Shasta's active volcano, much to the dismay of geologists, new-age hippies, the Native American's that consider the volcano a holy ground, and the other habitants of the small town surrounding this natural landmark.

Raszer shot his host a sidelong glance. 'At the risk of presumption, Professor?you're not being coy with me, are you? It can't have escaped you that the Military Order of Thule has a polar fixation. Is 'seismic chaos' what you think they're up to?'”
-pg 175

The miscreants call themselves the Order of Thule, and believe that lacking, or smaller than average tailbones are a sign of the supreme race. Commander Bronk Vreeland gained his status by having virtually no tailbone and his willingness to kill his only daughter, which has left him dangerously blinded by power and extremely unbalanced. Armed with weapons, and tactical training, this disillusioned militia holds fort on the volcano, blasting away as it core, and mind-washing a very confused young lawyer named Fortis Cohn.

The mountain volcano is showing signs of eminent explosion, when Raszer and his inside informant, April Blessing, attempt to retrieve Cohn's soul and stop the abuse to Mt. Shasta. Along with the fortuitous powers of tarot reader Madame Rey, and his trusty partner in soul searching, Monica Lord, Raszer just may have the advantage?if he gets there in time. This one is a page-turner and if it gets a little too highly scientific, at times, this only adds to the mystery and suspense. Raszer is at his best as romantic charmer and bad-boy sleuth. The Last Days of Madame Rey will have you on the edge of your seat until the last page.