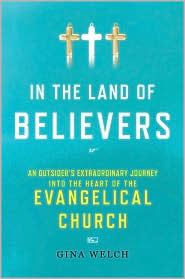 In the Land of Believers is the story of Gina Welch, a secular Jew who decided to go undercover as a Christian convert to figure out what makes evangelical Christians tick. She certainly picked a perfect place to conduct her amateur anthropological experiment: Jerry Falwell's Thomas Road Baptist Church in Lynchburg, Virginia. She joined a singles group, was baptized, and went on a mission trip to Alaska to save one hundred souls.

Welch often wrestled with the ethical dilemmas of faking Christianity to feed her intellectual inquiry. Like Welch, I also wrestled with my own opinion about the ethics of what she did. Welch claimed her decision to go undercover “seemed like the only way to access the truth about the other side” (5). On one hand, I recognize the freedom of her decision to conduct this experiment. However, there are better ways of fueling one's intellectual curiosity than exploitation. For example, Welch could have taken classes at Liberty University (founded by Falwell) to learn about evangelical and fundamentalist philosophy. However, writing about a student experience might not have sold as many books as writing about a non-Christian woman who went undercover as a Christian in an influential evangelical faith community.

Despite my misgivings about Welch's ethics, she wrote well about her struggle with feelings of both liking the community offered and being at odds with the beliefs of the Christians at Thomas Road. I believe the entire experience shook Welch's core beliefs of who she is as a person and how she views religion, especially evangelical Christianity. When Welch decided to stop going undercover, she figured out that she “wasn't following their design” (303). However, she also admitted that she felt “a kind of belonging” with the community (303).

I come back to exploitation. Though I am no fan of the evangelical fundamentalist brand of Christianity spewed by churches like Thomas Road, Welch essentially used this community to quench an intellectual craving she had. Furthermore, she is selling this exploitation in book form, which means she is profiting off her lies. It's like she took something without asking, used it for her own gain, and then asked for forgiveness when her guilt was no longer bearable. I am all for learning from other people by being immersed in their culture. I did this during an undergraduate religion course when I visited a Jewish temple. However, I asked for permission and was an invited guest. Welch lied her way into Thomas Road, and that tainted this book for me.