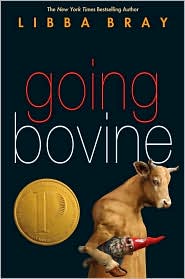 Think of a mix between John Bender and Brian Johnson (a.k.a. Judd Nelson and Anthony Michael Hall from “The Breakfast Club”) and you have Cameron, the 16-year-old punk geek from Libba Bray’s young adult novel, Going Bovine.

Cameron, an outsider compared to his pretty, popular twin sister, listens to obscure music, smokes pot with the stoners in the school bathroom, hates the MTV, celebrity-obsessed pop culture that rules his school, and has a pretty mundane life. According to him, the best day of his life was when he was five at Disney World and almost drowned on the Small World ride.

His life quickly turns from mundane to extraordinary when he’s diagnosed with mad cow disease. Hospitalized, with a grim diagnosis, Cameron is visited by a pink-haired, punk-rock angel named Dulcie who tells him he can be cured if he helps save the world first.

So begins Cameron’s crazy quest, with his hypochondriac dwarf friend, Gonzo, to find the mysterious, parallel-world jumping scientist, Dr. X, who Dulcie says can cure Cameron. On their journey to find him, Cameron and Gonzo run into fire giants, a happiness cult, a talking yard gnome, and become terrorists on the nation’s most wanted list.

Or do they? Do they really go on this fabulous journey or is Cameron hallucinating in his hospital bed? That question will haunt you as you read Going Bovine, and you may finish the book still not knowing what the hell happened, but you’ll have fun along the way.

Going Bovine is a fantastic, humorous ride. Cameron is a smart ass teen, but he’s also intelligent and has a big heart, so he’s a fun character to follow. His side kick, Gonzo, is also a source of amusement since he thinks he’ll die every turn they take.

You can read Going Bovine as just this journey between friends, but some of the discussions they have are cause for pause. Life and why we’re here are dominant conversations throughout the novel, and as one of my friends said about this book – “Whoa, deep.”

Even more than the journey and the discussions, Going Bovine may also make you want to go re-read a classic you’re probably familiar with – Don Quixote. There are many parallels to Don Quixote: Dulcie = Dulcinea; the Mexican-American dwarf Gonzo = Sancho; and, of course, the quest. It doesn’t hurt that Don Quixote just happens to be the book Cameron was reading before he was hospitalized (so it is a hallucination…maybe?).

Some parts of Going Bovine were kind of slow for me, but push through the slow because the ending is worth it. And after you finish reading it, come back here and tell me – journey, hallucination, or does it even matter?