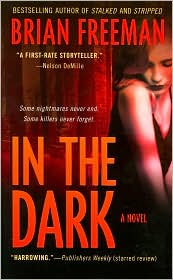 Duluth is the perfect place to set a murder. You’ve got Lake Superior, extreme weather, fascinating history, more lakes, bridges, lots of rocks, tourism and poverty side by side, and big (sometimes tall) ships. Every time something strange happens to me or my friends in Duluth I think, “This would make an awesome horror movie or mystery novel!” Like the time my friend learned about a dead baby found on the roof of her historic house in the early 1900s. Or the time I found out a local menace was actually a murder suspect. Or the time I found a dead body. Just kidding, I never found a dead body. In Duluth. No, no no, I’ve never found a dead body.

In the past I’ve figured Brian Freeman should just call me for ideas, after all, he lives in Minnesota somewhere, and he writes mystery novels. After reading In the Dark, I realized he doesn’t need my help. At all. His previous three novels are set in Duluth – with a brief sojourn to Las Vegas – and In the Dark takes place in West Duluth, Superior, Park Point and suspended over the High Bridge.

In the Dark is my favorite of his mysteries so far because the plot is so fantastical that I couldn’t stop reading. Freeman messes with the format a little – he includes flashbacks of a murder that happened years ago – and that interrupts the flow of the narrative. The narrative involves Tish, a writer who grew up in Duluth and comes back to write about the unsolved murder of her best friend Laura. Laura’s sister turns out to be Cindy, Stride’s (Jonathan Stride is Freeman’s main character, head of the Major Crimes department) ex-wife and love of his life, who is deceased. Without giving too much away, the plot includes: a robber baron, a peeper, Glensheen (briefly), Perch Lake park, someone being hit by lightning, untraditional love triangles, a hobo, and Wisconsin Point. The lack of realistic happenings in the plot is made up for by the twists and turns it takes.

One thing that amuses me by Freeman’s writing is how he writes about women. His main character is written like a god among men when it comes to attracting women. Not a book goes by where women aren’t throwing themselves at him. In fact, In the Dark opens with Stride’s current girlfriend admonishing him about flirting with the new character, Tish. The female characters involved with Stride are always portrayed as very good looking. The women portrayed as villains, however, aren’t as lucky. One villain is described like this, “She wore an untucked, misbuttoned white shirt and navy shorts. Her once sleek long legs were lumpy like tree trunks.” And that’s just one reference. At least his characterization of women is consistent with his plotting: usually stereotypical, but occasionally surprising. He does get points from me for writing about alternative lifestyles – I don’t want to give anything away here – but it makes the story more realistic. Not everyone in the world is in a typical male-female relationship.

Freeman writes about the layout and beauty of Duluth so well I would read his books even if I didn’t live here. His books are very popular in other countries – they’ve been sold in seventeen languages. It’s cool to imagine someone in Sardinia reading about our community. His next Stride novel is available now in hardcover. I’m having a hard time not buying it right now. We’ll see how my self resistance holds out but so far it seems as long as Freeman keeps releasing them, I’ll keep buying them, because they are so entertaining. If murder can be fun, Freeman sure makes it seem so.