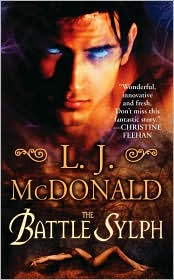 Sometimes you need to break your own rules. I recently bought a paperback pulp-fiction sci-fi/fantasy book at the supermarket (do we even call them that anymore, supermarkets? Grocery store? Can I just say Cub or is that too Minnesotan?). There were two rules I had as a stay-at-home Mom. One, no Oprah (still in tact). The other was no grocery store paperbacks. Usually I hear from friends how great these cozy paperback authors are. And when I tell them I don’t usually read that stuff there is great uproar and disappointment. “WHAT?! You’ve never read Janet Evanovich? Nicolas Sparks? James Patterson? Nora Roberts?” No. Never. It’s a rule. Nine bajillion other people read that stuff, I don’t need to.

So I was just as surprised as you were when I picked up a sexy grocery store paperback. I had just finished two books that were major disappointments. So I wanted fluff to recalibrate and get the icky out once and for all. Enter L.J. McDonald’s The Battle Sylph. I bought this book strictly because of the cover. . . an emaciated girl on an alter, an eerily blue-eyed, dark-haired hunk hovering over her in a sinister way. I didn’t even care what it was about, all I knew was that it was going to be a remedy. And delightfully, I was right.

McDonald has created a fantasy world here with endless possibilities. Her creation, the sylph, is like an element pooka. Along the lines of a familiar, the sylph is an elemental spirit that attaches itself to a human after a ritual of some kind. There are earth sylphs, water sylphs, fire sylphs, and air sylphs. Air sylphs with names like Tempest (I’d name my air sylph Gust). Each sylph has a talent according to their element. Fire sylphs keep you warm, give you light. Air sylphs help you travel? Earth sylphs help you garden? Water sylphs keep you clean? I’m joking, but you get the picture.

Then there are battle sylphs. Battle sylphs are usually owned by royalty or nobles and only men – big, weird, disturbed men who must kill an emaciated girl on an alter, a virgin, in order to tame the battle sylph. The battle sylph usually takes a predatory form and hates its owner but fights for him and is bound to him all eternity. Lots of rich material for McDonald to work with.

Here is where I stumble a little bit. I’m finding it very difficult to review a type of book that I’ve never really read before. Trashy grocery store paperbacks are a different breed. They are just what they are. They don’t try to be anything else. They are a genre unto themselves. So the reason we read them is in direct relation to how we enjoy them. They are french fries, potato chips. You have other “healthier” choices but their deliciousness is hard to resist. Sure you might feel a little guilty at the rate you devour them, but that doesn’t stop you. I gobbled up The Battle Sylph and wanted more. And thankfully, my timing was great since McDonald’s The Shattered Sylph was just released in April. Why yes, it’s already on my nightstand, thank you for asking.

While McDonald has created a rich fantasy world, her writing style still needs work. I’m all for the alternate universe, but when you’re talking nobles and kings and horse drawn carts, that to me is old world. So, in the Old World our characters shouldn’t use modern phrases.Flashback to our emaciated virgin girl on an alter, as the menacing black smoke of otherworldly evil swirls around her and blaring red eyes take in her naked maiden form, said girl says to the swirling black smoke “Hey you.” This becomes the battle sylph’s name, Heyou. What? Really? Seems a little below standard for even grocery store fluff. McDonald should study her predecessors more closely and take a lesson from the likes of Tolkien, Eddison, Rowling, and Pullman. All of which had their own distinct worlds, but were still anchored in the basic rules of time and place. And yeah, you can break rules, but it shouldn’t be that noticeable to your readers, and if it is, then it should be a celebration, not a distraction.