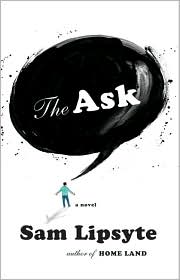 I was Sam Lipsyte’s bitch for the first 60 pages of his novel The Ask. I mean, he really had me in the zone. I was ready to sell my stuff, buy a psychedelic van, and follow him on a book tour until the restraining order caught up with me somewhere near Missoula.

Then I became exhausted. Sam Lipsyte is so freaking hilarious, too freaking hilarious, that I actually started to drown as I slogged through his super clever sentences and whack, sarcastic dialogue. I couldn’t follow the thin plot (really just seemingly an excuse to make said sentences, more than a story begging to be told); I couldn’t remember the lesser characters.

Random question: Have you ever ended up at an after bar with a bunch of strangers, only to find out they are all trying to become professional comedians? Ugh.

Milo is an office grunt, trying to raise funds for the arts department of the mediocre New York City university where he works. This is not his forte. His memories of what it was like when he still thought he could make a living as an artist are too fresh. His wife isn’t very amorous — she says she’s “touched out.” His very young son is a smart ass who attends a special hippie school and has a neglectful babysitter.

Then Milo gets fired. Then he gets a second chance: He must secure a donation from a high falootin’ donor — or Ask — who has requested Milo solicit his cash. Milo knows this smug richie rich from college, and this becomes a madcap adventure of late night phone calls, candy shops, and amputees. Chaos ensues.

You should shelve this book on your toilet tank and use it the way you would “Uncle John’s Bathroom Reader”: Open it. Read a really hilarious paragraph out of context. Chuckle. Refile, flush, and wash hands.

I just tried this experiment and landed on this interaction between Milo and Purdy, the biggie Ask.

“That’s the one. He’s impressive. What my dad used to call a comer. You must hate his guts.”
“He’s okay.”
“Sure he is. Anyway, that’s what he gave me to believe, when I met him at this sort of art happening. An historical reenactment of the dotcom bubble. Some guy rented a loft and hired actors to pretend to be designing websites. Have to say he nailed the details, the clothes, the snacks, the drugs, the toys. Thought I was in a time machine.”

See? You should see the one about the hangover.

So what’s wrong with this? Nothing in small doses. But it all reminds me of those early months with my boyfriend when we were always “on.” “The early banter months,” one could call them. Always trying to outwit the other one. One night I showed up at his house. He was in plaid pajama pants, vanilla candles flickering, a season of “Nip/Tuck” from Netflix. I started in with the joking and poking and prodding and he said the best thing he could have said. Something about us taking the night off from sparring. Could we just be quiet? He was too tired to play along. It was such a relief.

Sometimes I wished Lipsyte would just be quiet. Just for awhile. And then be hilarious again.