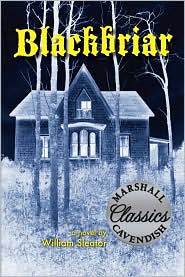 For nearly twenty-five years, the story of Blackbriar haunted me. When I was in sixth grade, Mrs. Mullins read it out loud to our reading class. Even in the fully-lit classroom surrounded by kids the story was scary as hell.

After sixth grade I didn’t give the book much thought. But whenever anyone asked me about scary books this is the one I’d conjure up. The problem was for years and years I had forgotten the title of the book and wasn’t sure if I ever knew the name of the author.

All I could remember was the creepy image of names carved on the back of a door. Each name had a date next to it, effectively making the entire house a giant tombstone. I remember that it had something to do with the Black Plague. But that’s it.

Occasionally, I’d ask someone if they’d ever read the black plague with the names on the door book when they were a kid. “You know the one with the tunnel and names, the NAMES. The names on the door!” Because repetition is the surest way to jog someone’s memory, right?

When Google was finally invented I would randomly search for things like black plague + children’s book or black plague + tunnel. Nothing. Sometime within the last year or so while doing something that had nothing remotely to do with books, the word Blackbriar flashed in my head. Forty-five seconds later, I knew the name of the book and the author (William Sleator). A few weeks ago I finally got around to buying the book.

Hoo boy! Blackbriar still had the power to scare me. I’m not sure how much was suspense came from the actual writing and how much was remembered fright, but it was a damn fun read.

The book’s about Danny, a fifteen-year-old orphan in London. His parents died when he was six or seven and apparently he had no family at all, because he became the ward of his mom’s lawyer. The lawyer lets Phillipa, a secretary at Danny’s school, become his guardian.

Around the time the book starts Phillipa’s had it with her job and London, and decides on a whim to pack up her cat, Islington, and Danny and move out to the country. When they arrive in the small town of Dunchester, the locals are freaked that Phillipa and Danny are going to go live up on the hill in the creepy, old Blackbriar.

The locals’ reactions and they way clam up whenever anyone mentions Blackbriar doesn’t deter Phillipa, and they move right on in. Of course once they get there all kinds of strange things start happening and Danny’s having crazy premontion-y dreams. There’s a ghoulish doll. Islington’s being creepier than usual. And there’s the door. The door with the names carved into it, just like I remembered. All the names have dates next to them except for the final name, Mary Peachy.

Danny’s curious and like a meddling character from Scooby-Doo he starts getting into the townsfolk’s business. With, of course, dire consequences. Along the way he meets Lark, a local girl about his age, who is enchanted with the cliffs and woods that surround Blackbriar. Oh, and the weird tumuli (an artificial mound, esp. over a grave; barrow) not far from Danny’s house.

Reading this book at thirty-seven is a lot different than hearing it at twelve. A lot of the suspense felt a little trite or obvious. But there were some scenes that had my pulse racing. At one point Danny and Phillipa return from a trip to town to see, through the window, a fire burning in the fireplace. Yikes, even now it gives me a shiver of fear.

Aside from the mystery and suspense here, what you really have is a coming of age story. One where Danny discovers that he doesn’t have to be an insolent brat who follows Phillipa’s every whim. It was a lot of fun to read, and I have to admit I purposely read the last few chapters in broad daylight, lest the scary images haunt my dreams.