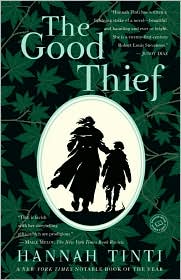 In The Good Thief, Hannah Tinti has created the equivalent of a carnival moon walk for adults. It is an adventure story, complete with an orphan and everything: Ren is a one-handed klepto who has recently been sprung from a priest-run home for boys slash winery by a man named Benjamin claiming to be his brother who weaves a fantastical tale about their dead parents. He’s brought along visuals. Two partial scalps to prove the massacre.

Benjamin uses Ren as a sympathy lure, making it easier to steal a horse and cart from a farmer. They join up with Benjamin’s partner in crime, a bit of a booze hound, and take off for a fictitious East Coast town, where they make a living as grave robbers. This attracts the attention of Mr. McGinty, who runs the town with a band of heavies referred to as the “hat men,” who hijack, beat, chase and threaten Ren et. al.

Along the way, Ren befriends a killer giant who had been buried alive, a deaf landlady and a band of women who are employed at the mousetrap factory, a wily dwarf who lives on a roof, and Ren’s two best friends from the orphanage, twin brothers.

This is just a cute, cute story, a full-on tug for the imagination. A scene where Ren is being chased along the rooftops of North Umbrage is so exciting that I felt like a ten year old curled up with one of those books that has the power to turn a casual reader into a voracious book freak. For all the charm, cleverness, and simplicity of language, this isn’t my favorite genre as an adult. So I like what Tinti did, and I admire the way she pulled it off. And it brought back a lot of good memories about my first relationships with books. But it probably won’t land in my top ten.