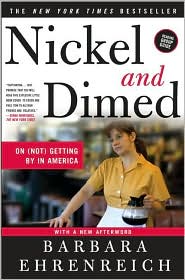 I keep a list of books it would be good for me, intellectually and culturally speaking, to read and call it (imaginatively) “Books I Should Read.” I am glad I've finished Barbara Ehrenreich's Nickel and Dimed, not only because I can now cross it off that list, but because it was an engrossing story.

In Nickel and Dimed, Ehrenreich sets out to see what she can make of the experience of being one of America's working poor. She takes six entry-level jobs in three different cities ? near Key West, Florida; Portland, Maine; Minneapolis ? and tries, as she puts it, to “match income to expenses.” The question she seeks to answer is: In America at the beginning of the 21st century, can a low-wage worker really achieve a decent standard of living without some form of government assistance? Although she doesn't explicitly say as much, I also think she's trying to dispel the “welfare queen” myth that all those on any form of welfare are lazy oafs cheating the government, living extravagantly on the Uncle Sam's dime instead of working for their piece of the pie.

I am pleased to say Ehrenreich's approach is non-fussy. She doesn't falsify her resume much, change her appearance or try to disguise her background with a fake accent or slow-witted demeanor. She just tries to spend a month or so in each place, working a low-wage job, trying to find affordable housing and attempting to not dip into her savings account when making ends meet gets rough. The best thing about Nickel and Dimed is its presentation of how problems tend to waterfall when you're poor.

No health insurance means no preventive health care, for example, so that when you finally get sick you're really sick and have to miss work and your paycheck takes a hit; low wages mean unsafe, unsuitable housing in neighborhoods with stores more “convenience” than “grocery,” which leads to an unhealthy lifestyle, which leads to poor health becoming an impediment to getting a “real” job, and so the cycle repeats itself. The picture Ehrenreich paints is one of people being crushed under the harsh reality of what low-wage jobs really do to people, which is squelch hope and any chance of upward mobility. Corporations emerge as villains, oppressing the masses through drug tests, discouragement of unions, and menial work.

Ehrenreich has a caustic wit that keeps her from sermonizing too much. At Wal-Mart, she describes how she grows to dislike fat people because they mess up the store's displays of tacky clothing; “We live with the fear of being crushed by some wide-body as she hurtles through the narrow passage from Faded Glory to woman-size, lost in fantasies involving svelte Kathie Lee sheaths.” When she suggests to a fellow Wal-Mart worker that the employees should start a union, his facial expression says she “might as well have suggested gumballs or Prozac.”

That being said, some of Ehrenreich's disapproval is misplaced. When she works as a housecleaner in Maine, she seethes against the homeowners, imagining they get a perverse gratification from making another human being get down on her hands and knees to scrub the floors. I just thought, “Well, yeah, maybe. Or maybe they just wanted clean floors.” She begins her stint at Wal-Mart by saying her job would “serve as an IQ test for the severely cognitively challenged,” but then later gets mad at a supervisor over an issue with barcodes; “What does she think this is, the National Academy of Sciences?” she asks. Well, which should it be, Barbara? You complain that your job takes no brainpower, but then whine when it presents a challenge. At a few points, I felt like she could've been more judicious in her criticism. Singling out a few things would be better than finding fault with everything.

Nonetheless, Nickel and Dimed is valuable as a beacon into a world gone murky with stereotype and rumor. I know Ehrenreich's account is somewhat artificial, in that it was constrained by the limits all experiments face, but I appreciate that someone had the gumption to venture into the underbelly of the American economy and say “Hey, guys. This is what it's really like down here. Pay attention.”