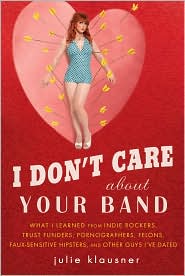 When it comes to comedy, my favorite is the kind where chaos is happening in the background, while at the forefront a straight man is seemingly unaware. This is why the “Naked Gun” trilogy is brilliant and also why nothing makes me pee harder than the scene in “Dirty Rotten Scoundrels” when Steve Martin is running in circles, banging a spoon against a sauce pan and screaming “Oklahoma! Oklahoma! Oklahoma!”

When it comes to comedy writing, I’ve figured out the exact coordinates that need to exist in a piece: Women with an arsenal of adjectives, super clever metaphors, a Sinatra smoothness with topics that are of a vaginal nature, and the ability to boil down flings and relationships to extract the hilarity.

This sounds easy. Sassy bloggers try to do it every day with a range of results that usually veer toward embarrassing, mark-all-as-read fare. Chelsea Handler did it once, with her book My Horizontal Life and then face flopped with Are You There Vodka, It’s Me Chelsea.

Julie Klausner took a shot at this template tale with I Don’t Care About Your Band: What I Learned from Indie Rockers, Trust Funders, Pornographers, Felons, Faux Sensitive Hipsters, and Other Guys I’ve Dated and came out with a whim: This thing is pretty freakin’ hilarious. Klausner is a comedy writer with credits ranging from VH1 to McSweeney’s to NY Times Magazine and This Recording. She also posts funny blips on her website.

There is a bit of a formula to the sassy irreverent way she paints these liaisons: Meet dude. Have a terrible conversation over drinks. Take things horizontal. A bit of self flagellation. Maybe another hook up. A parting of ways that is long overdue. But she is funny enough to give each scenario its own voice.

There are a few self-help style pep fests about being the star in your own relationship which are a little weird and misplaced. Also, for my own vanity? purposes, I wish this had been shelved in “memoir” instead of “humor.” And my other complaint is that sometimes I find it exhausting to laugh twice in the same sentence.

Whenever someone writes one of these books, I always wish there was a comment from the guys who are caricatured.?Like Greg, whom she refers to as the ugliest person she’s ever had sex with.