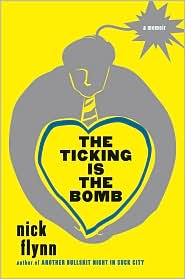 One of the trickiest jobs in the world would be writing the summary of Nick Flynn’s memoir The Ticking is the Bomb for the dust jacket. It is billed as being about Flynn’s thoughts on torture after the revelation of photos from Abu Ghraib, juxtaposed with sonogram photos of his daughter.

In true memoir fashion, it is also about his alcoholic father, freshly sprung from prison and living intermittently on the streets and in a shelter where Flynn works, his mother’s suicide, and the sticky situation of being in love with two women — one who is my favorite character in the movie “Say Anything.” (“Joe lies. When he cries.”)

This challenge of actual focus is something Flynn cops to early in the book. He isn’t exactly sure how to describe this piece to those who ask:

If asked I’ll sometimes say that I’m writing about torture, but I’ve found that if I say the word ‘torture’ many go glassy-eyed, silent, as if I’d just dropped a stone into a deep, deep well. Sometimes I say I’m writing about my unborn daughter, about my impending fatherhood — five months to go, the clock’s ticking — but I don’t want to jinx it.”

His story has plenty of “Dear Diary” moments, dated entries, that are not in chronological order and about the size of a 100 calorie snack pack, about people, places and the more emo grit from Flynn’s past. The drugs, the bad behavior, this girlfriend and that one.

Flynn is an amazing writer, plunking down quiet sentences that make really thoughtful paragraphs. His roots as a poet are as obvious as bra straps under a tank top. In a chapter called “Worksong” — my favorite passage in this book — he addresses how some days will be spent making love, some will be spent getting high, some will be spent reading Ulysses. . . “Some of the days you are given will be spent in a strange city, and at the end of the day you will know that you have spoken to no one except the girl you got your coffee from, no one except her. There will always be days like this.”

But, and you know there is always a but, I just could not get into this story-ish type of collection. The lines connecting these brief glimpses seemed fractured. It would be best read roulette style: Pick it up and read a chapter, come back a few days later and read another chapter at random.

His style seems to ooze with emotion and thoughtfulness, but lacks personality and so all of those emotional words become more clinical: Pass the scalpel. This is like the cliche of a homecoming queen, all beauty, no spark.

And this says more about me than it does about him: But when I figured out that the mother of his child is Lili Taylor, whom he calls “Inez,” I took a greedy, E! satisfaction in reading sections about their life.