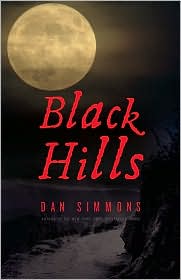 Dan Simmons has dabbled in a lot of genres: Horror/Thriller, Science Fiction, Detective/Crime, and (his latest trend) fiction inspired by actual events. His writing has always revealed how well read and well researched he is. The result of that research and literacy has created some tremendously enjoyable books.

I am a fan of Dan Simmons. I have come to expect intelligent and engaging fiction from him. Which is why his newest effort, Black Hills, is such a letdown. Rather than being strengthened by it, the book suffers from the research that Simmons has done. There's simply too much data, and the narrative stumbles, time and time again, as he tries to stuff in everything that he learned on the various subjects inhabiting his novel.

The novel focuses on a Lakota boy named Paha Sapa, whose name means Black Hills. We first meet Paha Sapa in June of 1876 at the Battle of Little Bighorn. He has just inherited the ghost of George Armstrong Custer (yes, the Custer of Custer's Last Stand) by merely touching the dying body of the General. (This is not a spoiler. The ghost is inherited in the very first sentence.) It's an interesting premise, and yet Custer's ghost proves to be little more than a MacGuffin. Paha Sapa has few real interactions with the ghost, despite its presence in his mind for over sixty years. And although Custer does get several chapters to tell his story, it is not the story of Little Big Horn, but rather a semi-pornographic longing for his wife Libbie.

As the novel progresses, it jumps (non-chronologically) throughout the timeline of Paha Sapa's life. Aside from his time as an eleven year old, we see him in 1936 where, using the name Billy Slovak, he is the chief powder man on Gutzon Borglum's crew at Mount Rushmore. We see him at the World's Columbian Exposition of 1893 as a performer in Buffalo Bill Cody's Western Show. He even ventures to New York in 1933 where he scales the New York Tower of the Brooklyn Bridge.

The research pervades the text in all of those time periods. Simmons regales us with numbers and figures for everything that Paha Sapa experiences. We learn the amount of explosives used on Mount Rushmore, we know how much steel was used to build Ferris's Wheel at the World's Fair, and we learn all about the sinking of caissons for the Brooklyn Bridge. I will admit that these are all interesting facts, but Simmons regurgitates them with no style at all. He pummels us with page after page of information, to the point where it reads more like a creative research paper than a novel. It's forgivable within passages of exposition, but Simmons delivers much of his research through dialogue. And people simply don't talk like that? at least, not every time they speak.

There are, however, some touching moments within the book. Paha Sapa's conversations with his son are thought provoking meditations on what it means to be American. If the whole book had been like those moments, I would be singing its praises. Unfortunately, they were few and far between.

The book wraps up with a horribly contrived “forward vision” that reads as an anti-expansionist, anti-cattle farming, conservationist lecture by Simmons. And there is an even more superfluous “where are they now” epilogue.

I really wanted to like this book, but it was simply not good. The writing lacked any of Simmons's usual style and I found myself not caring about the fates of any character. That being said, I would urge readers to seek out Simmons's other forays into the realm of fictionalized history and read The Terror or Drood.