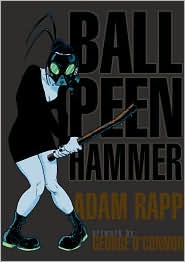 Disclaimer: I went to college with Adam Rapp for two years I think, might have only been one. We knew each other in the way that you know your boyfriend’s friends. He’s a great guy but I couldn’t tell you his favorite food is or his favorite band. I read The Year of Endless Sorrows last year and loved it. So I was thrilled when I learned Adam had written a graphic novel called Ball Peen Hammer.
I love that I’m on the cusp of really getting into graphic novels. Writing a book is writing a book, but writing a graphic novel means you write your words and story to be seen, to be visually brought to life by something else, something other than the reader’s imagination. Playwrights have a gift for this, but writing something to be said and acted out is different than writing something specifically to be brought to life by pictures alone. And here is where Adam Rapp’s Julliard education in play writing may have played a part in his decision to undertake the graphic novel.

Ball Peen Hammer takes place in a plague-infested, acid-raining, post-war, burnout, hole of a city. Gas-masks are a requirement, the only food available is canned peaches, and there are two terrorist groups working the city. One is The Fellowship – these are dudes killing kids, mostly black kids for reasons that are unclear to both the characters and the reader. Then there is The Syndicate, who may or may not be government/military or a privately funded militia. The Syndicate kills everyone, they gas innocents in a an under tunnel and that kind of stuff. And let me clear this up right now, one group has nothing to do with the other.

Most of the story takes place in one building, a clock tower. In the basement are Welton and Underjohn. Welton is part of The Fellowship and Underjohn is a new recruit. Welton has the plague and is in pretty rough shape, and he drastically deteriorates over the short timeline of the book. Underjohn is a writer/reporter type who has no idea what he’s signed up for in joining The Fellowship. In the corner of the basement are a bunch of sacks, and there’s a lot of gaging and barfing at the smell. But thankfully, even in plague infested post war shithole basements, there is air freshener. They wait for instructions from The Fellowship.

Upstairs in the clock tower is Horlick’s place. Horlick is a scraggly thirteen year old, which is hard to buy since he’s drawn like a nine-year-old boy. Horlick steals some melons and instead of eating them he pulls a little American Pie action on one of them. Enter Exley. Exley is a hot, goth actress who seems to be floating through the apocalypse with her make-up still in tact. More on that in a minute. Exley busts Horlick and his melon fucking and the two become friends.

The rest of the story; whether it be downstairs with Welton and Underjohn or upstairs with Horlick and Exley; we basically have two people in a room talking. Sure people exit and enter and they share and learn new information. But we never move out of the room, and this is a huge disappointment. Huge questions were raised regarding human life and art, senseless killing versus mercy killing, living in art or just writing about it, and if we had just gotten out of the goddamn clock tower Ball Peen Hammer might have had a chance. But the setting, both in time and place, weighed so heavily on everything else it was hard not to be distracted.

There were some highlights – Exley and Welton’s one-night-stand in which she kisses his arm with her black lipstick (see, I told you her make-up stays in tact) and in true star-crossed-lover fashion Welton refuses to wash it off and keeps a bandage over it to preserve it (Bitch has some nitro-lipstick man!). Horlick talking about his brother and the girl he used to like was heartbreaking. In the final stages of Welton’s illness there is a great parallel to Exley starting to miscarry. Exley doing right by Horlick in the end and instead of killing him for art or whatever, she shows mercy. There were also a lot of threads from The Year of Endless Sorrows: tall skinny red-headed boys, sexy actresses, typewriters, ball peen hammers, toilets not flushing, writers block, miscarriages. Which makes me think that Mr. Rapp is putting a lot of himself into his work, and I love that, it’s so courageous and raw.

Ball Peen Hammer reads more like a movie story board than a graphic novel. The stakes just aren’t high enough for any of these characters. Setting everything in a broken clock tower might mean that time is irrelevant, so what are these characters moving toward? Is the goal that everyone ultimately kills each other? That we’ve all lost so much of our humanity life is just a shitty basement? With so many questions left unanswered for both the characters and the reader, it’s hard not be frustrated. Which is why I read Ball Peen Hammer twice, because I wanted to make sure I wasn’t missing something huge. That there wasn’t some big fat clue staring me in the face. Nope. I left Ball Peen Hammer just as crestfallen as its characters.