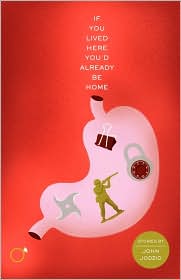 Hours after finishing “Gravity” one of the stories in John Jodzio’s debut story collection If You Lived Here You’d Be Home Already, I met with my writing group. As we talked about what we were reading at home, I started in with a rushed and breathless description of the story.

“It’s about this guy who is obsessed with throwing pennies out his office window. He’s on like the eighteenth floor. And as you keep reading you find out that his wife likes to have dangerous sex, and okay, I’m just going to ruin it for you right now and tell you the whole thing. . . ”

Then I told them the entire story, and we all exhaled at once. “Wow,” they said. “I KNOW,” I said. “It’s really fucking good.”

The fact that Jodzio crams so much awesome into a story that’s a mere seven pages (and in second person!) makes it even better. Short stories crammed with good are in abundance in this slim collection. Really, the book comes in at 180 pages and has twenty-ones stories in it. Many of them are are short shorts or flash fiction, though I am not sure that term is still used.

I wasn’t a fan of a lot of the short shorts, besides “The Dojo,” which is a failing more on my part than the writer. After reading a story that spans a page, page and a half, I am always left thinking “what the hell was that?” Much like poetry, I don’t know what to do with the short shorts. They’re nice and all, but like Tic-Tacs, I’m not quite sure what the point is. A lot of times short shorts feel weird just for weirdness’ sake. Bleh.

It’s not that I don’t like weird, because when Jodzio gives us more than two pages of weirdness, I’m on board. Like in “The Deadsitter” where a young boy is paid eight bucks an hour to pretend he’s the neighbor woman’s dead son. A job that has been passed down from his older brothers. Or in “Kalispell” where a coke-snorting inventor vies for the heart of a woman with a skywriting pilot in 1920s Montana. And, another favorite, “Monarchs” about a guy who has to babysit his dad’s butterflies.

While some of these situations might seem strange to actual people, in the world of the character’s Jodzio has created they’re not. Even though there’s sometimes an element of “what the fuck?” to the stories (as when a clown who is looking for his missing dog is repeatedly prank called) it feels genuine and not forced.

Perhaps what I liked the most about If You Lived Here You’d Already be Home, aside from “Gravity,” is that unlike most first-time collections it never feels like you’re reading the same story over and over again (see: Laura van den Berg’s What the World Will Look Like When All the Water Leaves Us, Dan Chaon’s Fitting Ends, hell even Mary Gaitskill’s Bad Behavior).

Here, each story is wholly unique and that makes it exciting to read because you never know what you’re going to get when you turn the page. And, then there’s “Gravity.” Yes, I wanted to say it again. Really, this story is worth the price of the book alone. Trust me. It’ll be like when you bought an entire album based on how much you enjoyed the song on the radio and were delightfully surprised by how good the rest of it was.