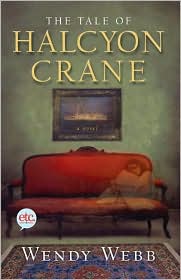 Wendy Webb is the author of The Tale of Halcyon Crane, a chilling story about one woman’s discovery of dark family secrets and the ghosts and mysteries surrounding them. It has been selected as an IndieNext Pick for April by IndieBound, the independent bookseller’s arm of the National Bookseller’s Association, and also as a Midwest Connection Pick by the Midwest Bookseller’s Association. A longtime Twin Cities journalist now living in Duluth, Wendy edits Duluth~Superior Magazine.

Wendy’s got a trio of upcoming readings here in the cities, starting with Magers & Quinn (3038 Hennepin Ave. So) at 7:30 p.m. on Monday, April 5th, then on Tuesday, April 6 she’s at The Bookcase (307 E Lake Street, Wayzata) at 7 p.m. and if you’re busy that week, don’t worry she’s coming back on Wednesday April 14 to read at Common Good Books (165 Western Avenue N Suite 14, St Paul) at 7:30 p.m. Until then you can content yourself with reading her answers to our 6 questions.

What book(s) are you currently reading?
I always have several books on my nightstand. Next up: Arcadia Falls by Carol Goodman. She’s one of my favorite authors and this story is right up my alley – ghosts, murder, a mystery to solve. Can’t wait! Also on tap: The Language of Secrets by Dianne Dixon, the story of a man who is rather surprised to find a tombstone with his name on it when he goes to visit his parents’ graves. I’m also reading False Mermaid by another Minnesota author, Erin Hart. [editors note: Erin just answered the 6 questions herself last week!]

Have you ever had a crush on a fictional character? Who?
Rhett Butler. I know, I know, but I feel that I could handle him.

What was your first favorite book?
Little House on the Prairie by Laura Ingalls Wilder. But the most significant book for me was A Wrinkle in Time by Madeline L’Engle. I read it when I was about 13 years old, and after that I knew I wanted to write books for a living.

Let’s say Fahrenheit 451 comes to life, which book would you become in order to save it from annihilation?
Not totally familiar with that book. But If I had to pick one book that I would not want to see destroyed above all others, it would be Complete Works of William Shakespeare . If all other books were annihilated, this would teach future writers everything they needed to know to start again.

What is one book you haven’t read but want to read before you die?
The Secret to Immortality. No seriously, I’ve always been such a voracious reader that I don’t think there’s anything I’ve wanted to read but haven’t. But. . . Steve Berry wrote a great book recently that dealt with the discovery of the Royal Library of Alexandria, which housed all of the writings of the ancient world. It was destroyed, taking all of that ancient wisdom with it. Steve’s book asked the question: What if all of the scrolls had been saved and hidden away? I’d love to discover the library still existed and get to read all of those books. Who knows what ancient wisdom was lost?