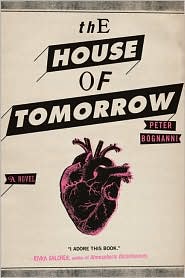 I am now going to demonstrate how small and magical and awesome the world can be, and I am going to use the intro to Peter Bognanni’s 6 questions to do it. Sorry, Peter. If you want to get to good stuff, skip this beginning and jump right to his answers. I’ve never met Peter, but I did stand behind him at the Twin Cities Book Fair last fall. We were both in line to meet Lorrie Morre. Nicholson Baker was in front of Peter.

I only know it was Peter because he had just gotten the ARC of The House of Tomorrow and was giddily showing it off to his friends like a little kid whose first tooth was a little wiggly. I remember telling myself to make a mental note of that book, so I could read it for MN Reads. Of course, eventually I had to talk to Lorrie Moore (a personal favorite) and promptly forgot.

So when The House of Tomorrow showed up on my doorstep a few months ago, the lightning bolt of memory flashed through my brain. Hey, I thought, that’s the dude from the line’s book. Small world, right? Yeah, sorry. I had to share.

Anyway, Peter’s going to be reading with a whole bunch of folks at 7 p.m. Thursday, March 22nd at the UofM’s Coffman Union Theater, 300 Washington Avenue Southeast Minneapolis, MN, and right now he’s going to answer the 6 questions we always ask.

What book(s) are you currently reading?
I just started The Song is You by Arthur Phillips, which I’m really enjoying so far. He writes about music beautifully. Particularly in the early pages, there are some rapturous passages about Billie Holiday. Before that, I finished The Ask by Sam Lipsyte which is both the funniest and most depressing book I’ve read this year. That’s meant to be a positive review. My taste usually shows up in that exact intersection of the Venn Diagram.

Have you ever had a crush on a fictional character? Who?
I’ll go with my first literary crush here. The first heartbreak is always the strongest. This would be Estella from Great Expectations. I had to read this book in the 7th grade, and I think it was the first time I really experienced full empathy with a character. Just like Pip, I could feel my heart in my throat every time Estella marched cruelly and beautifully onto the page. Estella, I still pine for you, you harsh mistress!

I just mentioned Kurt Vonnegut as an all time favorite for another interview. And I actually saw him speak at a church in Minnesota once. He told everyone to “put down the damn-fool computers!” And here I am using one to promote my own book. Oh well. I guess if I could have taken him anywhere back then it would have been to the Museum of Questionable Medical Devices. Then we would have shared a pack of Pall Malls (even though I’ve quit smoking) and discussed the probability of alien life-forms and their ability to enslave us.

What was your first favorite book?
I’ll go with a childrens’ book here for the sake of accuracy. I loved The Giant Jam Sandwich. For those who haven’t read it, the town of Itching Down is besieged by 4 million wasps and they create a, yes, Giant Jam Sandwich to trap them. I read it out loud recently to friend’s little boy, and I still couldn’t hold back my excitement. A giant sandwich, to catch wasps!

Let’s say Fahrenheit 451 comes to life, which book would you become in order to save it from annihilation?
I would save something funny. Maybe A Confederacy of Dunces. If Fahrenheit 451 becomes real, we’ll have an even greater need for laughter.

What is one book you haven’t read but want to read before you die?
I’d like to finish War and Peace. I got seven-hundred pages in and threw in the towel. I was so close! I wonder if there was peace again? Or war, maybe.