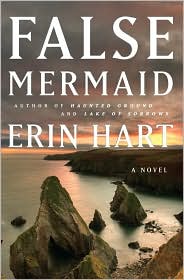 Erin Hart writes a series of archaeological crime novels set in the mysterious boglands of Ireland, the lastest of which is False Mermaid. After graduating with a theater degree from Saint Olaf, she earned an M.A. in English and creative writing from the University of Minnesota-Minneapolis, and worked as an arts administrator, journalist, and theater critic. A lifelong interest in Irish traditional music also led her to co-found Minnesota's Irish Music & Dance Association.

Her debut novel, Haunted Ground, introduced readers to pathologist Nora Gavin and archaeologist Cormac Maguire. Lake of Sorrows, the second novel in the series, was recognized as a Minnesota Book Award finalist in 2004. False Mermaid is the third book in the series. Erin will be reading from False Mermaid at 7:30 p.m. on Monday, March 29th at Magers & Quinn, 3038 Hennepin Ave So. Today she’s answering our 6 questions.

What book(s) are you currently reading?
The People of the Book by Geraldine Brooks. It caught my interest initially because it was about a book restorer, and I'm working on a story involving a ninth-century manuscript. As a fan of complex, layered plots, I especially like the way Brooks alternates between the modern-day narrative of the book restorer, and episodes from the book's earlier history-delicious.

Have you ever had a crush on a fictional character? Who?
I remember being incredibly let down when I finished reading East of Eden, being really engaged by the character of Adam Trask, with the way he thought and spoke. I guess I enjoyed being in his company, and was sad when I finished his story. And I seem to remember that as a teenager I had quite a yen for Sydney Carton, the dissolute but self-sacrificing hero from A Tale of Two Cities.

I have lots of favorite authors, so we might need to book a whole room! But if I had to choose one, it would probably be A.S. Byatt (Angels and Insects, Possession, The Children’s Book), and I'd take her to W.A. Frost in Saint Paul, a warm, comfortable place where you can actually carry on a conversation!

What was your first favorite book?
The first book I really loved was a storybook called The Tall Book of Make-Believe by Jane Werner and Garth Williams; I can remember the stories, and still see the illustrations in my mind's eye. The first chapter book I remember being a favorite was Half Magic by Edward Eager, about four siblings who discover a magic coin that only gives them half of what they wish for-because somehow that premise seemed so much more realistic than a genie that would just grant any three wishes!

Let’s say Fahrenheit 451 comes to life, which book would you become in order to save it from annihilation?
I'd have to say The Complete Works of William Shakespeare-if it's really the only book I can save, because there's plenty in it.

What is one book you haven’t read but want to read before you die?
The Sound and the Fury by William Faulkner-I've always meant to read it one day. I actually enjoy the challenge of an unconventional structure!