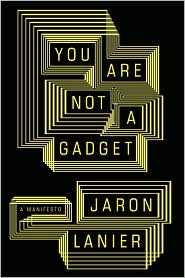 Jaron Lanier's?You Are Not a Gadget is what many would call a manifesto on the current state of the Internet. A computer scientist and supposed father of virtual reality, Lanier uses this book to air his lamentations about how how the Internet has descended into a land of anonymous trolls, something which it wasn't really designed or meant to be. Lanier also takes aim on open-source collaboration projects, such as Wikipedia, and music mashups often found on YouTube. He points to these as examples of how individual ideas are being lost in a sea of internet anonymity.

For the record, I am no fan of the anonymous comment troll often found on news stories spewing racist and hate-filled rhetoric. Nor am I a fan of grammatically-challenged and banal Facebook & Twitter posts, as these tend to add to an already noisy Internet. Like Lanier, I am also concerned about how facts become twisted into lies and then rapidly paraded as facts. The “dreaded path of dualism” scares me just as much as it scares Lanier (154).

However, I am not willing to accept Lanier's prophesy of people eventually uploading themselves to the Internet. Though there is a sheep-like mentality in many people, I am willing to give humanity the benefit of the doubt. I believe most of humanity is ego-driven enough to resist the allure of cloud computing life and will remain selfish individuals.

Here is Lanier's six-point plan for a better Internet.

While I would love an Internet that would adhere to Lanier's six-point plan, I am realistic in seeing that many people are not like this and are free to use the internet as they please, dull content and all. Lanier should let go of his internet expectations, as they caused him enough suffering to write this book as therapy.