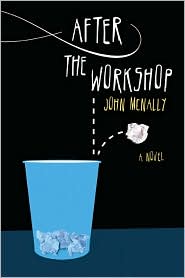 Writer's block, obsessive authors, and drunken arrests, don't begin to describe John McNally's novel, After the Workshop. Main character, Jack Hercules Sheahan, is a writer that had a chance to make a name for himself as a novelist and let it slip through his fingers, finding himself years later as an ill-paid, often disrespected media escort. A job that basically entails making sure visiting authors get to their Iowa hotel, then to their reading and book signing, and back on a flight out of town.

Sheahan is adequate at his job, but filled with jealousy and remorse each time he picks up an author who had more guts than he did. An unfinished novel sits in his apartment and he lusts after his ex-fianc?, Alice. The few people he can, sort of, call friends are the has-beens that hang out at the bar he constantly visits, and his next door neighbor, M. Cat, who he really hasn't spoken to. Life continues on its weary pace until troubled author, Vanessa Roberts, comes to town with baby in tow and disappears a few hours later.

‘What the hell happened?' he asked, smiling, clearly amused.
'What do you mean?' I asked, my mouth full of pastry.
'Vanessa 'The Outhouse' Roberts,' he said. 'She was a no-show. I've been calling the publicist all day to find out what happened, but I keep getting her voice mail.'
'Oh that,' I said. 'Yeah, well, the thing is?she ditched me. She checked out of her hotel.' ”
-pg 130

Sheahan's life is instantly catapulted into complete chaos. Roberts's publicist, Lauren Castle, keeps calling to find her missing author and finally flies to Iowa for answers, he has an unexpected fling with Alice which leaves him reeling, and last, but not least, famous and also disappeared author S.S. Pitzer shows up on Sheahan's doorstep to charm and steal the unfinished novel. Through it all, Sheahan keeps thinking about where life went wrong, if his first short story was only published due to a gambling debt with his professor, if Alice is still the woman of his dreams, and whether or not he has what it takes to start writing again.

McNally's novel is dark, depressing, and filled with ironic humor, like the fact that Sheahan claims writing poetry is infinitely more dangerous than writing novels, with more suicides and mental disorders than other styles of writing. It is the least published, least respected, and least read, yet poetry is quoted constantly in this novel. Also delightful are the depictions of literary groupies who try to use sex to get to the top.

The romantic waxing for the great Iowa Writers' Workshop is a bit overdone, but it is entertaining when the 'Workshop' goes up against Naropa University for a poetry speak-off. The clich? of drunken writer is played a lot more heavy-handed than it need be, especially if the main character wants to be seen as an old, somewhat battered, soul, rather than an ignorant college student with the first taste of beer on his lips. Despite this, the novel is enormously entertaining and a struggle to put down.

Personally, I am affectionate towards the publicist, who rants,

“You're just a writer wannabe, right? You're just a slacker hanging out in the college town at his local coffee shop, wearing a beret?writing the Great American Novel on legal pads?You probably smoke clove cigarettes and drink Jameson's but don't eat meat?You're a living, walking clich?, and I bet deep down you know it too.”

Wow! How can you not love that? After the Workshop is a great novel for writers and writer wannabes.