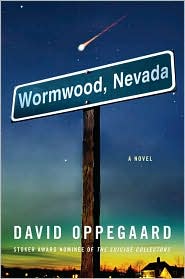 When you were little, do you remember staring at your pile of wrapped birthday presents and being so excited to see a huge box? Small boxes surrounded the big box, but they weren’t nearly as important as what was in that monstrous box. It’s got to be something great since it’s that big, right?

I was always disappointed by the big box. Inevitably it was the first I’d want to open because it just had to be good, but it was usually a sleeping bag or a box of clothes. When I was turning eight, my oldest sister filled a huge box full of old blankets, pillows, silverware, and rocks so that when I’d shake it I’d have no idea what it was, which made it even more exciting. She did include a present in the box, a set of Encyclopedia Brown books, which I liked, but I was still let down that the present did not represent what was advertised.

The excitement and ultimate let down of the big box is exactly what I felt like reading Wormwood, Nevada by David Oppegaard. In the first half of the book there was a slow build up, enough to keep me entertained and wondering where it was going, but then the last half was like opening the big box and finding it full of new socks and underwear. I didn’t hate it, but it was a let down.

In Wormwood, Nevada we follow a young couple, Tyler and Anna Mayfield, as they move to and explore the town of Wormwood. Anna starts having apocalyptic nightmares as soon as they enter the town and Tyler starts seeing a little alien, who is described like you may imagine – short, gray, with big almond-shaped eyes. Tyler is usually drunk or high when he sees the alien, which brings into question whether or not he’s really seeing it, but I was excited about the prospect of an alien encounter. Other townspeople were excited about it, too, especially when a meteorite crashes in the town. One resident even sits next to the meteorite holding a “The End is Near” sign.

The idea of aliens visiting Wormwood lingers throughout the story, with Tyler joining a secret alien society that believes aliens are already on their way to help us usher into a new, peaceful, prosperous era, which is what we always hear alien enthusiasts say – “They’re coming in peace to help us because we’re ruining our planet.” We’ve heard that before, but I was still along for the ride in Wormwood, Nevada to see how this would all end.

The momentum that was in the first half of the book didn’t really go anywhere in the last half. Anna still continues to have her nightmares and Tyler still continues to see an alien around town. Anna’s dreams are different each time, as are Tyler’s sightings, but there are no raised stakes or surprises to keep it all going, and then ending is boring when it could have been amazing.

I didn’t hate Wormwood, Nevada, but it was just lacking something that I needed to really enjoy it. I think it has all the components to become something great, but where it is right now just wasn’t enough for me.