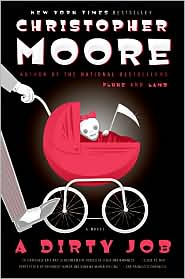 I’m not sure as to why, but death has always fascinated me. Not so much the death happens to everyone sooner or later kind of death, but the whole I am Death, pleased to meet you, now walk this way kind of death. Christopher Moore’s A Dirty Job fit the bill perfectly.

Charlie Asher is a Beta Male (Moore will explain that in wonderfully humorous detail) whose wife has just given birth to a daughter. The over-doting Charlie is driving his wife and hospital staff crazy. After being asked a number of times to please leave, he does, only to return a few minutes later. This time there’s a tall man in a mint green suit standing over his wife. Startled that Charlie can see him, the man apologizes and is gone. Charlie’s wife is dead. Thus, Charlie is, unbeknownst to himself, thrown into the world of death; or as he later calls it – becoming a Death Merchant.

“She said you were Death.”
“I am?” Charlie said. “Am I?” His breath caught in his throat as the day played back in his head. “What if I am?”
“You know son,” the Emperor said, “I am not an expert in dealing with the fairer sex, but you might want to save that bit of information until the third date or so, after they’ve gotten to know you a little.” p. 64

Charlie becomes one of a few who collect the souls (that have gotten into beloved objects) of the departed (or soon to be departed) and find proper people for those souls to be transplanted. How does he learn his new job? As a stranger tells Charlie’s sister, “__ tell him to look for a package in the mail. I’m not sure when.” p.16

Unfortunately for Charlie, Lily, a girl who works at his store, gets the package (a book) and thinks that it all revolves around her. Needless to say, Charlie stumbles through while upsetting the balance of good and evil.

But not all is well in the Death Merchant business. In the sewers under San Francisco, the Morrigan plot to steal all the soul objects for themselves, thus giving them power to take over the world.

Christopher Moore takes the subject of death and throws it on its face. From a little girl who can kill by pointing and saying the word ‘kitty,’ to a demon who will shred a man apart after giving him a hand job, Moore’s humor stretches from touching to subtle to laugh out loud hilarious. If you’re into politically correct don’t bother wasting your time with this book (and please don’t waste my time talking to me either). But if you enjoy warped twisted humor intermixed with a touching portrait of a father doing the best he can under some, ah, bizarre circumstances – let’s talk. This is my first Christopher Moore book and certainly not my last.