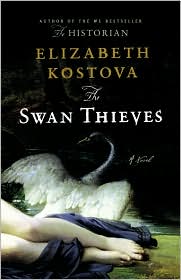 By all accounts, I should have really liked Elizabeth Kostova's The Swan Thieves. That makes the fact that it's a wretched failure all the more disappointing.

The Swan Thieve, Kostova's second novel, begins with the admission of Robert Oliver, a painter of some renown, to the psychiatric care of Andrew Marlow. Oliver had been committed after attempting to damage a painting at the National Gallery of Art and now will speak to no one about the incident. Investigating the source of Oliver's derangement sends Marlow down a path cluttered with meaningful paintings and even more meaningful encounters with the women who litter Oliver's past. I'll end my plot synopsis there to preserve whatever stale crumb of originality remains, but know that the novel travels back in time to 19th century France (or a postcard version thereof) and pivots on a series of love letters expressed in the quaint, demure manner authors like Kostova seem to think people of that era used.

The first of Swan Thieves' many flaws is with that premise. To create The Swan Thieves, Kostova unabashedly borrowed from works like Possession and The Time Traveler's Wife and even added a whiff of The Da Vinci Code. Even liberally cribbing from bestsellers past, Kostova can't get a firm grip on her subject material. Her characters exist on their descriptions – “I am a lonely psychologist.” “I am a mysterious and beautiful woman painter” ? but have the depth and emotional range of cardboard. Her plot slides forward with something like bland inevitability; of course the ex-wife will take a shine to the inquisitive doctor, naturally the subject of that painting will turn out to be significant. Whereas The Swan Thieves sources ? excuse me, inspirations ? represented something real and exciting, Kostova's work is empty and lifeless; a hologram rather than a work of meaningful fiction. It's like she's a child playing dress-up; “Look at me, mommy! I can be an author too, just like them!”

For a novel that is supposedly about the spell love can cast over people, Kostova's writing is asexual and bloodless. There is no passion, no lust, no desire, no yearning. What passes for smoldering romance is that series of letters, and I apologize if expressions like “your humble servant” and “with fondest regards” don't exactly make my heart beat faster.

Kostova's writing is just as limp elsewhere in the novel. She describes a woman's eyes as “ocean blue.” First, she can't be more original than a Crayola box? And second, has she ever even seen the ocean? Frequently it isn't blue at all ? what she must be comparing the woman's eyes to is a can of paint she once saw called “Ocean Blue” because only a marketer would think “ocean” is a good descriptor for “blue.” Kostova's sentences are unvaryingly simplistic in their structure, her vocabulary insultingly facile. For reasons known only to her, she is utterly afraid to attempt anything that might be mistaken for a literary device.

If this is an especially lacerating review, it's probably because I am jealous. Kostova went to Yale and got her MFA from Michigan. Her first novel, The Historian, is the only first novel in history to debut at the top of the New York Times Bestseller List. For the life of me, I can't figure out why Kostova has enjoyed the success she has. Whatever pact she has made with the devil, I need to make too. It also angers me that Kostova had so much to work with and produced this result. Romance should never be this insipid or history this broad-brushed. It should be a crime to take painters and psychiatrists – inherently interesting professions, after all ? and make them so soporific.

I fully regret every 576 pages of this book.