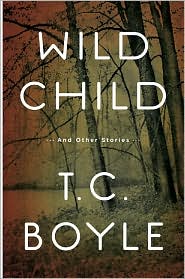 The biggest reason I like T.C. Boyle is that he's just weird enough.

Too often, authors concoct characters so strange or extreme they seem just like what they are ? fiction. Wild Child, Boyle's most recent collection of short stories, displays his knack for giving the reader characters ordinary enough to be relatable, yet unusual enough to merit being the subject of a story.

My two favorites here were “Hands On” and “Bulletproof.” In the former, Boyle uses just a few pages to capture the loneliness and frustration of a divorced woman who feels she's past her physical prime. I wonder how many women just like her I passed on the sidewalk today, each a stewing column of angst in high heels and a trench coat. In “Bulletproof,” Boyle introduces us to a man whose community has been plunged into the religious v. secular debate by the “Evolution is just a theory” sticker the school board is placing on science textbooks. I can easily imagine there are men just like him in the multitude of towns facing the exact same situation.

Of course, Boyle wouldn't be much of a fiction writer if he just recorded what he saw around him. He keeps his characters firmly grounded in reality, but gives each an edge, a twist, a mutation that makes them worthy of deeper inspection. Every character has a slight perversion that makes him or her more interesting. In “Hands On,” he presents the woman at the moment she snaps; the loneliness and idleness of single life having become too much for her to bear silently. In “Bulletproof,” the narrator feels unwillingly thrust into the debate; confused and not even all that interested, he seems resentful he's even in the story. In Boyle's hands, everyday characters become something just above the flow of the rest of us.

Boyle writing, too, lifts his stories above being snapshots. In “The Lie,” for example, an early morning scene finds “hard-driving rain drooling down the dark vacancy of the window” and everything “seemed to have a film over it; a world coated in Vaseline.” It's like Boyle has an extra sense, or at least an extra facet of a sense we all have, and uses it to bring to light what the rest of us miss in the blunting sameness of the world around us.

(Note: it's worth pointing out that this is a collection of “selected” short stories, meaning they've previously been published in magazines. Don't be like me and go into this book expecting everything to be new and fresh.)