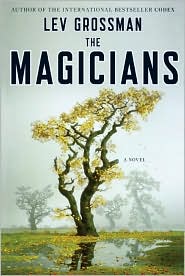 It’s been a couple of months since I absolutely loved a book I read and I’m starting to get frustrated. Having heard The Magicians by Lev Grossman was a great fantasy novel, I was excited to read it, and by page twenty I was smiling and giddy. My bad-book streak was over, I proclaimed on Twitter, or was it?

Quentin Coldwater, the quasi-hero in The Magicians, is a smart but mopey high school senior bound for the ivy leagues. While his life seems good, Quentin has always dreamed of being somewhere else, particularly in Fillory, a Narnia-like land that the Chatwin children entered through a grandfather clock in the Fillory children’s novels Quentin read as a child.

When an ivy league interview goes bad, Quentin receives an envelope, and as he’s opening it a white piece of paper flies out and he chases it into this weird other land, similar to how Alice chases the white rabbit down the rabbit hole. He thinks he’s entered Fillory, but he really entered Brakebills, a college for magicians, like Hogwarts was for Harry.

Yes, readers of The Magicians will be reminded of Narnia, Harry Potter, Alice, and even Tolkein’s Middle-earth. It’s almost an homage to those previous giants, but it can’t quite stand up to them.

Quentin becomes a student at Brakebills, and I was still fascinated with the novel at this point. Crazy tests, odd teachers, magic spells, weird students, and even a Voldemort-like bad guy. I’m hooked; this book is fabulous; I love it; I’m intrigued; I want more; and then…

Then, to steal a quote from mothers everywhere, Quentin starts running with “the wrong crowd.” In their third year at Brakebills, students are placed in their Disciplines, the areas of magic in which they will thrive (again, Harry Potter flies to mind), and he becomes a member of the Physical kids. Physical magic is rare, so the Discipline is small and we meet more Brakebills students. This is where the novel started becoming really annoying. The Physicals are like rich prep school students, without a care in the world, yet they hate and mock everything, as if nothing is good enough to match their wit and intelligence. They know everything at nineteen, of course. In my day, these were the annoying rich kids in “Beverly Hills 90210.” In today’s world I suppose it would still be the annoying rich kids in the new “Beverly Hills 90210,” though I admit, I haven’t watched it. Without Dylan, what’s the point?

By the end of the novel, when magic and fantasy return suddenly, I didn’t care if these characters lived or died, and I also started seeing the homage to Narnia, Harry, Alice, and Middle-earth as gigantic rip offs. How dare he take their concepts and screw them up so badly! We have to care about the characters to go on the journey with them, Grossman, and your characters sucked. Give me a hero, not a cocky jackass who blames everything bad in his life, even bad choices he makes, on everyone else. I should have just re-read The Chronicles of Narnia series instead.

If you loved a book you recently read, please let me know, because I want to write a happy review next time!