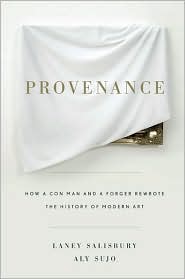 Provenance is a book that succeeds on its story ? which is good, because stylistically it doesn't have a lot else going for it.

A nonfiction account of one of the greatest scams in recent history, Provenance chronicles the exploits of con artist John Drewe, who swindled some of the biggest fixtures of the British modern art world in the 1990s.

The operation begins when Drewe finds talented artist John Myatt in financial straits and takes advantage of his desperation by hiring him to create artwork in the style of famous modern artists without revealing (at first) that he plans to pass Myatt's imitations off as the genuine work of modern masters like Giacometti and Matisse. When Drewe learns how to manipulate provenance ? a piece of art's chain of ownership, used to authenticate that it is indeed a genuine article ? the operation balloons in scale. Since Drewe can fake proof of a painting's legitimacy, it doesn't matter that Myatt's imposter Chagalls and Braques look a little off; “documentation” and “proof” go further than the vague idea that something is aesthetically improper.

Myatt is the first of many innocent parties Drewe ensnares in his web. By the time the decade-long gig is up, Drewe has earned about $2 million by selling fake art and pulled the wool over the eyes of many an art expert, museum curator, restorer and auctioneer. By introducing fake documents into the historical record, he has damaged the history of British modern art and marred the principle method by which the art industry establishes artwork as authentic.

Authors Laney Salisbury and Aly Sujo know they've seized on a good story, but their execution in unraveling it could've used some refinement. Too often, “insight” into characters is provided only by what they're wearing ? a “Savile Row suit” (and little else) lets us know someone is respectable and upstanding; wearing a “charity-shop suit” is shorthand for its wearer being lower-class and penniless ? and the characterization of all characters but Myatt is too black-and-white for my taste.

For instance, Salisbury and Sujo all but fall over themselves in painting Mary Lisa Palmer, one of the earliest to realize that Drewe's act is fake, as persistent and intrepid, as if she's the Nancy Drew of the modern art scene. There are far too many descriptors of her along the lines “loyal,” “determined,” and “not ready to give up;” redundancy seems to be the authors' modus operandi. There is also a little unnecessary detail (my principle complaint with nonfiction). Why bother telling us what brand of easel Myatt uses? That's either a product placement or a pointless fact the authors inserted in hopes of impressing the reader.

But faulting a good story for being technically imperfect is missing the point. Salisbury and Sujo do a good job balancing a formidably large cast of character and they pace the story well. They also exceed at distilling the creation, sale and display of modern art into something that can be understood by someone who thinks of art as the Thomas Kinkade hanging in the living room. I enjoyed Provenance from start to finish not because it is stylishly written, but because it's a thrilling story unspooled by the hands of people who know what they're doing.