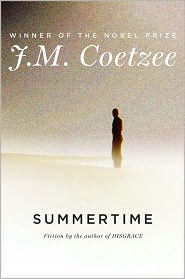 The character John Coetzee, as written about in a fictionish-like sorta memoir, is socially awkward, not a real man, does not emit any sort of sexual vibe, and was never a great writer embraced by the collective.

Summertime by JM Coetzee is delivered as a novel with an alternative story format. Vincent, an English biographer, is conducting interviews with people who knew Coetzee in the early 1970s when he was living in a ramshackle place with his father in South Africa and teaching English. Vincent is trying to eke out anecdotes from the subjects that get to the root of John as a person for a biography that he concedes that few will read. By this time, the fictional John has died in Australia. Instead Vincent gets a handful of reluctant interviewees who confess that they barely knew the man and didn’t necessarily like him.

It starts with Julia, a former neighbor who was introduced to Coetzee when he delivered a bad touch at the grocery store. Julia is married to an absentee husband known for his extracurricular romances, and as a response absorbs Coetzee into her life. They bumble and fumble in the bedroom, just once actually syncing up sexually, and then dissolve from each other’s lives. Julia moves to Canada and barely gives John another thought. Meanwhile, she may have appeared in character-form in at least one of his novels.

Margot is a cousin who was once very close to young John, but time has accentuated their differences. She tells Vincent about a family reunion that Coetzee attended, weirding out his relatives. Margot stays in touch briefly afterward, sending John letters filled with advice on how to get normal. Adriana is a fiery Brazilian dancer whose daughter is studying English with John. She invites him over for dinner and immediately questions his credentials and his manhood, not to mention his relationship with her young daughter. Meanwhile, John falls nutso futso for her, sends her countless love letters and shows up in her dance class. Martin met John when they interviewed for the same job, and the two maintained a friendship. He talks about John as a writer. Sophie was a former colleague who eventually fell into bed with the writer.

As to what imprint I may have left on him, that I’m not in the position to judge,” Sophie says. “But in general, I would say that unless you have a strong presence you do not leave a deep imprint; and John does not have a strong presence. I do not mean to sound flippant. I know he had many admirers; he was not awarded the Nobel Prize for nothing; and of course you would not be here today, doin gthese researches, if you did not think he was important as a writer But — to be serious for a moment — in all the time I was with him I never had the feeling I was with an exceptional person, a truly exceptional human being.”

This worked better for me when I was in the mindset that I was reading something pretty damn close to the truth than read as pure fiction. Imagine being involved with a room full of people gossiping about you, but you are the puppetmaster of the conversation and through yourself, you are described as an asexual loony bird with a undefinable relationship with your father. It is navel-gazing at its finest and most self deprecating. As straight-up fiction, parts run cold. Dispatches from John’s cousin bored me so much I almost jumped ship, until I reminded myself what the writer was doing. Then I got all woozy-goozy into it again.