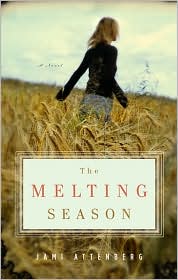 When Catherine Madison falls in love with a boy named Thomas, the love is so complete and all encompassing that when he nicknames her Moonie it sticks so well that everyone takes to calling her Moonie. As is often the case in small midwestern towns, this one located in Nebraska, Moonie and Thomas marry soon after high school. However, the couple doesn’t get the happily ever after teenagers often dream they’ll get. Of course, because if they did why would there be a novel?

When Jami Attenberg’s The Melting Season opens, Moonie (I love the name Moonie Madison) is fleeing Nebraska in a snow store with a suitcase full of cash. Moonie’s not sure exactly where she’s going, but we know that anywhere is better than where she was — a small town with an insecure husband, a pregnant teenage sister, emotionally-absent father, and cold, alcoholic mother.

Eventually she ends up in Vegas, quite a shock for a girl who never traveled beyond the Midwest. There she checks in to a fabulous suite and quickly befriends Valka, a California florist with a penchant for rockstar imitators.

The two ricochet around Vegas sharing bits of their individual tragic stories. Moonie hints that she has a great, awful secret that she can’t even put into words yet because to do so would be to make it even more real. If you’re gonna have a character who is a little coy with the reader, this is the way to do it. Not once was I ever annoyed with Moonie’s inability to tell me exactly what the hell her problem was. This is a testament to Attenberg because generally I can stand a coy character for about 83 seconds.

Eventually, after having a sexual encounter with a transgendered Prince impersonator, Moonie pours out all her secrets to Valka. As is the way with books where the main character is running from her problems, Moonie eventually returns home to face her demons.

The problem here, is when she gets there the I’m not quite sure the demons are demonic enough to have caused so much strife. A lot of the Moonie’s problems stem from her relationship with her mom and how that reinforced a bond between Moonie and her sister.

I didn’t see the bond between Moonie and her sister, I was only told that it was there. Aside from one flashback that involves Moonie babysitting, they only talk on the phone and via text message. When Moonie’s marriage falls apart due to Thomas’ feelings of sexual inadequacy, her sister is nowhere to be found. So when Moonie stages a Jack Baueresque escapade in the middle of a Nebraska blizzard to rescue her sister, I was surprised.

But I shouldn’t have been surprised. When it comes right down to it, I really don’t know Moonie. I know about her marriage and her family, and that she doesn’t have any friends (aside from the one she made in Vegas). And I can’t tell if that’s the point or not. Moonie was so consumed by her relationship with Thomas that she never developed a personality outside of him. That, I understand. But because Moonie doesn’t know herself and never really gets to know herself, the reader doesn’t get a firm grasp on her which makes everything she suffers feel kind of. . . I don’t know, off.

It’s really too bad. The Melting Season is one of those books that’s fun to read, the journey is entertaining and engaging, but when you get to the end it leaves you cold and a little unsatisfied.