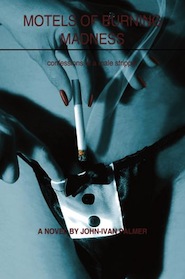 Some things you glance at, do a double-take, and then go ewww, still unable to take your eyes away. That’s what I did with the cover of John-Ivan Palmer’s, Motels of Burning Madness – Confessions of a Male Stripper. The cover shows a lit cigarette being dropped into a male g-string that looks like a miniature tuxedo? Who would not want to read this book? Well, I could think of a few people, but I’m not going to go there. I was intrigued.

The novel revolves around Huey Dubois, a sympathetic stripper who readily admits to having more than a few flaws.

I may have been somewhat an authority on how to conduct myself at a party in a g-string, but love was always beyond me, uncontrollable, not subject to manipulation like sex. You think you learn everything from one relationship gone bad and then a whole new set of problems comes up in the next one, and the next one, and on forever until you realize no matter how experienced you think you are, you’re never experienced enough. p. 3

Through the sleaze bars, competition of fellow strippers, affairs, jealous husbands (including a cop), Huey has an attraction for older women — and an infatuation for one older woman in particular — Gloria. As if his world wasn’t crazy enough before, Gloria becomes his obsession, and she takes full advantage. Like playing cat and mouse (or more like a cat toying with a mouse before the final pounce), Gloria leads him deeper and deeper into a world of a different kind of trouble than he regularly deals with.

I buried my nose in the loose skin of her neck, and when I reached up to touch her hair, my hand grazed a hard, silicone breast. . . She felt me everywhere and sniffed me like a dog, but we had no sex. Plenty of sexual tensions, but it wasn’t released. . . When I woke up she was gone. p. 101

I don’t want to give away any of her many secrets, so I’ll stop here.

Palmer writes with a flair that gives his characters a believable life in a world where most of us will never venture close to, let alone understand. He’s obviously done his research (something I’d love to ask him about one day). The humor is dark, wry, ironic, and very funny. He delves inside the business of male dancing, removing layer upon layer of the glamour of stripping. Males make nowhere near the money as their female counterparts and as is common in both sexes, often resort to other means for larger tips.

There’s nothing graceful about running for your life. I burst through what I thought was the back door, but instead of going outside I went into a dark garage full of boxes and bug spray and lawn equipment. It was an obstacle course in terror. p 41

Motels of Burning Madness took me to a world I’ve always been curious about, but never had the courage to step into, at least not with both feet. Now I don’t feel the need. It’s a short book, only 195 pages, and a fast read. You’ll be able to easily read it in one or two sittings (and you’ll probably want to – it’s hard to put down). Believe me when I say, dear readers – this is not the Chippendales.