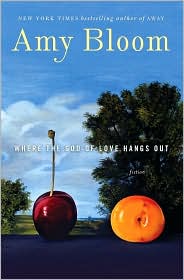 DISCLAIMER: I’m not much on short stories, and I’ll admit that I’m using a generalization here, but so many of them are too something. Like contrived edginess for the sake of being edgy. Like a tribal tattoo on the small of your back, but you don’t know what the symbol means. And other times they just don’t feel satisfying. They require the same level of commitment as dating someone who is moving in a week: Enough time for a fling to create the illusion that he doesn’t crap, but not enough time to learn his favorite flavor of Doritos.

DISCLAIMER’S DISCLAIMER: I also find it impossible to write about a collection of short stories without first talking about how I never read short stories.

SO WHY READ AMY BLOOM’S WHERE THE GOD OF LOVE HANGS OUT? Jodi tweeted something about it. What she tweeted, I don’t remember. But it was enough to pique my interest, so I picked it up the next time I went book shopping.

AND? This knocked my socks off.

WHAT’S IN IT? Bloom’s collection includes two sets of serial short stories that are linked, which I like because it was like this weird middle ground between short story and novel. Almost novellas. Where you get to see the stories through to their heartbreaking conclusions. Again, again, again, and again.

In the first, William and Clare are BFFs, but married to other people, a foursome that spends a lot of time together. A little bumbly fumbly while watching CNN turns into a full fledged fling, and eventually marriage. In the other, Julia and her stepson go all hot pants on each other while mourning the death of Julia’s husband, Lionel’s dad. This one emotional, drunken decision has three more stories worth of ramifications.

WHAT’S SO BIG ABOUT IT? The characters. The chronically ill William has a foot that Clare believes looks like a turnip. The moment where Lionel first appears in Julia’s doorway, his briefs hanging off his “high skinny hips,” and you know, you KNOW what’s going to happen if these two aren’t careful. And, they aren’t. In “Between Here and There,” Bloom creates this fantastic story where an asshole-of-a-father (the kind of guy who, when his son comes out to him, says “A fat fag? Not much fun in that”) seemingly makes a personality turnaround. Bloom writes it in a way that makes the new personality seem so fragile, like it could shift back to the old way if the wind blew. But you want to hope. Also, there is this great moment in the title story where a man who is in love with a waitress goes to an out of the way bar and runs into his daughter-in-law. They have this conversation about the life she’s had, and he in turn, unsolicited, tells her of a homosexual experience — well, three years worth, actually — that he had for money in college. “If not for him, I would have had to drop out of college,” he says.