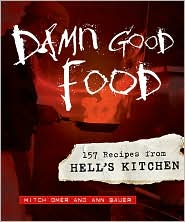 Minneapolis's own Hell's Kitchen is no relation to the television show of same name but it is just as intense, and reading the story behind its success is even better than watching Chef Ramsay yell. The vivacious chef and owner of our local hellish hotspot is Mitch Omer. He joins literary forces with Ann Bauer, an unfulfilled food writer. Bauer gains a new zest for life, love, and all things gastronomical after chronicling Omer's tumultuous rise from dysfunction and suicidal tendencies to beloved and edgy chef.

Omer's fascinating story of mental health, drugs, and gluttony fill the pages of this cookbook. From rebellious son to drug-filled bouncer to backroom cook, the storyline is intermingled with recipes acquired during the many stages of Omer's turbulent life.

He started snorting blow every night and then zipping through the dining room, making funny, charming small talk with the guests. When cocaine got too expensive, Mitch switched to crystal meth. And eventually, when even meth failed to send him, he started smoking PCP.”
-pg 33

Damn Good Food is a meat-lovers wet dream. Carnivorous taste buds will salivate with recipes like “Biscuits with Rabbit Gravy,” “Antelope Stroganoff,” and “Bison Benedict.” The mashed potatoes even sport an impressive '2 cups rich chicken broth.” Vegetarians shouldn't shy away from dishes, like “Mahnomi Porridge,” “Hot Damn Buttered Pretzels,” and “Lemon-Ricotta Hotcakes.” In addition to its range of recipes, another distinguishing factor to this cookbook is the completeness. There are directions for tartar sauce, curries, rubs, and even peanut butter. If a recipe calls for mayo or Jamaican jerk rub, you have a reference to that recipe.

There are three key spices in any jerk seasoning: Jamaican pimento (which we call allspice), thyme, and Scotch bonnet peppers, so hot they have been known to spontaneously combust. No longer relegated just to pork, jerk seasoning is used on every manner of meat and fish, as is seen in this book's charred sea bass recipe.”
-pg 148

The vicious red cover, punk photos and remnants of Omer's youth grace the pages. Despite his current success and happiness, anyone else walking in Omer's shoes may not have made it. The inspiration of Hell's Kitchen and life of Omer is captured charismatically by Bauer, who discovers she is a bit of a badass, herself. If the rock-n-roll lifestyle takes a slight precedence over the food, we can hardly blame either writer. This is full-on cooking in every sense.