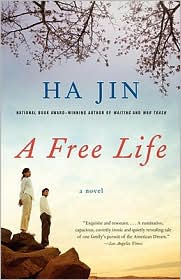 As I just clicked on Goodreads’ four-star rating for Ha Jin’s A Free Life,? I couldn’t help but wonder about the countless number of stars I would have awarded it if something had actually happened in the book. I mean, I already “really liked it” in the book review website’s parlance. With a little drama or conflict, I probably would have needed a solar system to convey my enthusiasm.

This book is is, dare I say, a little light on activity. Nan Wu is a wanna-be poet who probably has the potential, but doesn’t have the balls to make stanzas in English. He’s a politically frustrated grad school dropout living in the United States with his wife Pingping. In the opening scenes, their son Taotao — who until this point has been raised by grandparents in China — is joining them.

The story follows the trio as Nan works minimum wage jobs and assembles a cast of literati friends, all while liking his wife a lot but not-so secretly mourning the one who got away, that vixen Biena who jilted him years ago. Nan goes from a job in security to a job in a Chinese restaurant. Then he uproots his family and moves to Georgia, where he takes over ownership of the Golden Wok, a restaurant in an almost-empty strip mall. The family continues to work toward financial stability, home ownership, and a better understanding of American culture.

In his free time, Nan reads the dictionary.

The chapters are short vignettes from their day-to-day life. And every time something happens, it is like “Oh! will this be where the drama and conflict come in?”

When some Chinese women come to the Golden Wok and Nan tells them he doesn’t want to donate money to help flood victims in China, will they run off and tell the Chinese community not to eat at his restaurant?

They bought a house. Is it going to collapse into a pile of termite meal?

Is Pingping’s friend Janet, who owns the nail salon down the strip going to corrupt our hero’s wife?

No. Nope. Uh-uh. These are just things that happen. And then the next thing happens. And none of it is particularly terrible, and some of it is good.

The biggest question is: Why is this book so enjoyable? Is it Nan’s stilted English? All those “eezes” and “eets”? Is it the barely perceptible movement of the story that actually goes from Point A to Point M in slow subtle strokes? Is it the satisfaction of a family living the “American dream” and working hard to understand idioms? Is it that scene where Pingping is convinced that because Nan is hanging out with gay men, he is going to be lured into becoming gay too so she feeds him preventive vitamins on the sly?

It must be all of the above. A Free Life is a pleasurable read for no discernible reason. Ha Jin. What a magician.