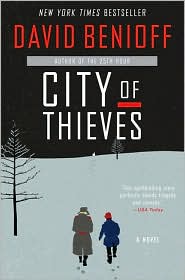 I’m normally not a big fan of historical fiction. If I’m going to be reading about history, I’d much rather read about something that actually happened. Ken Follett’s The Pillars of the Earth was one exception. Now, David Benioff’s City of Thieves is another.

It’s 1942 and the siege of Piter (Leningrad) is well underway. A scrawny, shy, young Jew named Lev finds a Nazi paratrooper lying dead in the middle of the street. Lev and his comrades scavenge for food and anything else that might be useful. They run as Russian soldiers approach. Only Lev is captured. Labeled a looter, Lev is expecting a shot to the back of the head, but instead is thrown in a cell, already occupied by Kolya, a cocky, good natured soldier. Kolya is also labeled a deserter. Together they are brought in front of the colonel who promises their lives back if they can bring him one dozen eggs within a week for his daughter’s wedding. And so the journey begins.

On Nevsky Prospekt all the shops had been closed for months. We saw two women in their sixties walking very close together, their shoulders touching, eyes on the sidewalk looking for a patch of ice that could kill them. A man with a glorious walrus mustache carried a white bucket filled with black nails. A boy, no more than twelve, tugged a sled, a bloodless bare foot dragging along the hard-packed snow. Dragon’s teeth studded the street, reinforced concrete blocks arrayed in rows to hinder the movement of enemy tanks. A printed sign on the wall read WARNING! THIS SIDE OF THE STREET IS THE MOST DANGEROUS DURING THE BOMBING.” (p 42)

Benioff transported me back in time to a period in history that still scares the hell out of me. Pairing the eternal optimist, Koyla, with the ever pessimist, Lev, Benioff brought these characters to life along with the horrors of World War II Russia. From having absolutely nothing in common, these two young men must depend on each other to survive. Benioff writes using all of the senses. I felt the cold as winter deepened; the fear and disgust as Lev and Koyla dealt with everything from cannibals, to partisans, to Nazis. This is where Koyla’s optimism carried me through. This book could have easily been bogged down into one depressing scene after another, but the lightheartedness of Koyla and his growing relationship with Lev, skewed even the most horrific into amusing and even touching.

‘I heard the bedsprings creaking and looked up to see Kolya leaning over the side of the top mattress, his upside-down face peering at me, his blond hair hanging in filthy clumps. He looked like he was worried about me, and all at once I felt like crying. The only one left who knew how frightened I was, the only one who knew I was still alive and that I might die tonight, was a boastful deserter I’d met three nights before, a stranger, a child of Cossacks, my last friend.
“This will cheer you up,” he said, dropping a deck of cards in my lap.
They seemed like ordinary playing cards until I flipped them over.” (p 137)

Yeah, a tiny spoiler alert – they were pictures of naked women.

Some scenes in this book almost came across as a documentary, they felt that real. The only part of the book I wasn’t real fond of was the very beginning. The introduction takes place in present day with the grandson finally getting his grandfather to talk about his time in Leningrad during the war. It made the ending somewhat predictable, but after all he went through, it was still a satisfying end.