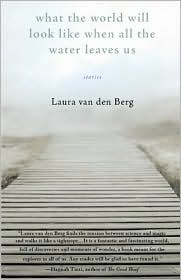 Laura van den Berg writes beautifully. Her sentences and paragraphs feel like gauzy, ethereal dreams. It’s the kind of writing that seems effortless which means it probably took great amounts of effort. She populates the stories of What the World Will Look Like When All the Water Leaves Us with people on quests for mythical creatures — bigfoot, Nessie the Loch Ness monster, Mishegenabeg (a monster said to inhabit Lake Michigan) –which adds to this dreamlike quality. But make no mistake these people live in the same world we live in and face the same kinds of problems we face. They’re all dealing with some kind of loss — parents, career aspirations, husbands or boyfriends — and are searching for something to fill the hole that loss has left in them.

Now, I’m going to offer up a transcript of a chat I had with my friend Kelly (who also writes the occasional MN Reads’ review) about van den Berg’s collection. While trying to write this review I kept going back to what Kelly and I had discussed. I was going to attempt to recreate the points in flowing paragraphs, but decided instead to just show you what we said, for two reasons. First, it’s short and to the point. Second, I like that people discuss things like this. Here we go:
Kelly: I finished What the World Will Look Like. . . I dug it.
Jodi: I am on the last story I think she writes beautifully, but some of the stories are a little over-long. The fucking Loch Ness one went on forever.
Kelly: Yes. And, like a lot of first collections, it’s the same story over and over.
Jodi: Yes! My guess is her second collection will be totally awesome.
Kelly: I agree–her writing is really beautiful. The last story could have been a novella I thought.
Jodi: I’m only a few pages into the last one. She tends to repeat herself. Even that last story, three, four pages and she’s told us not once, not twice, but three times about the dad not coming back from Alaska. [Editor’s Note: The last story, eponymously titled, is amazing, even with the whole Alaska repetition. There’s a scene where the young narrator is swimming in the ocean with her mother’s lover that is so fraught with tension my jaw clenches just remembering it. It’s really fucking good]
Kelly: Ha! I noticed that. The first story, I think, blew me away with its awesomeness. And the death mask one.
Jodi: I agree! The first one is my favorite so far because, well, there’s a real conflict. A lot of her tension is really subtle and internal which seems to give the collection a sort of floaty quality.
Kelly: Yes. And, I think if I read the stories separately, the plot/character repetition wouldn’t have stood out quite so much. . . but I think you’re right with the the length and some of the internal repetition making some weak
Jodi: But her writing is so strong that you overlook that, or at least I do.
Kelly: Yes–and, part of what the collection taught me is how overly-critical Loft classes are (and have made me)…can you imagine one of her stories being workshopped? Some of the housewives/Salingers would have shredded it to bits, when they’re all, though somewhat flawed, really amazing stories.
Jodi: Which is why so many people think stories can be “too workshopped.” We workshop the originality right out of them.

Want more van den Berg?
Read her Larghearted Boy Book Notes essay
Read her story Up High in the Air (this is the one with the Lake Michigan monster)