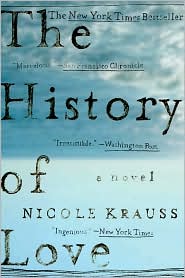 Famous writer couples are fascinating. Two people, two laptops, and two creative brains bumping into each other over the course of a single day. Maybe occasionally sharing a toothbrush. Mincing garlic and talking about adolescent characters. “You know Alma?” Jonathan Safran Foer says to Nicole Krauss, referring to the 14-year-old girl in her novel The History of Love. “I’m going to make a 9-year-old named Oskar from the same material. They’d probably be friends. Not yet, but in the future.” And then he cranks out Extremely Loud and Incredibly Close.

A dead father, early onset anti-authority ideals, kids wandering the streets of New York City, trying to fix a mother. I like to imagine that Krauss and Foer spend so much time tossing around ideas that eventually they forget who invented what. Two people throwing ingredients into the same pot. Material becomes part of a collective. “Our idea” instead of “Nicole’s idea.” Thus the similarities between their novels. Not just thematically, but structurally. Foer likes to take a blank page and write a single word on it; Krauss a single sentence.

Of course, they both pull off their shared ticks extremely well, and incredibly smoothly.

The History of Love is about a book that so affected Alma’s parents, that she is named for every female character within the text. There is a romantic story of how her father, now dead, found the not-so-much recognized book in a small bookstore, and later passed it on to Alma’s mother. Now, years later, Alma’s mother has been commissioned to translate the book for a mysterious man. Alma has decided that if she can learn the truth about this book, the real people the characters are based on, she can make her mother happy. She goes a little Nancy Drew, following leads, and stopping by city offices for public records.

Her whacky younger brother Bird thinks he can fly, is building an arc, and has one friend: a janitor at his school.

At the same time, the story of Leo Gursky is revealed. The quintessential would-a could-a been writer and lover who has never caught a break. By the time he got to America and knocked on the door of his childhood love — Alma, of course — she was irreversibly married, this new couple raising the son Leo Gursky never knew he’d planted. Gursky never falls in love with anyone else, and is this quirky old man who causes scenes in public so that if, by chance, he dies alone in his apartment that day, he won’t have gone unseen. He knocks things over in stores, he poses for nude for an art class. Gursky is quietly following the trail of his now-middle aged son, a famous and celebrated author, as well as penning his own story starring a character named Leo Gursky.

Leo Gursky is simultaneously funny and cute, and so so sad. Reading his story felt like I was towing a semi with my soul.

This is a nice story with a complicated plot that all ties up, but not necessarily nicely. I think I have some internal bleeding from the whole experience.