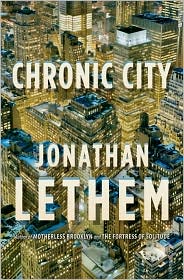 Jonathan Lethem’s Manhattan is a variation of the real one that a former child-actor still pulling in a chunk of change might have access to: a hot-pants dinner party with the mayor in a mansion where the carpeting on the stairs is so thick that a guest can climb soundlessly to the top and check out the mayor’s knacks; a place where an eccentric man whose wardrobe consists of pajama-ware and whose wallet bursts at the seams might pay bucko bucks to share a meal in a rented-out restaurant with a D-list actor who has re-achieved A-list celebrity.

A pre-established gray fog blankets the downtown area; an artist creates gaping maws in the ground that an occasional businessman might consider a good place to do a suicidal belly flop; a tiger is loose in the city, tearing up bodegas and inspiring a cultish Web watch. Briefly, the city is enveloped in something that is defined as a chocolate smell by some residents, a buzzing by others; a vacant high rise becomes a home for homeless dog.

Chronic City is a statement on authenticity and altered truths, a cultural satire, and in its best moments a portrait of BFFs chillaxing at the pad, smoking weed and talking smart, getting crunk on coffee, mowing down burgers and being socially awkward with the ladies.

Chase Insteadman is a former child actor living on the residuals of the sitcom he starred in years ago. His fiancee Janice Trumbull is an astronaut who is stuck in space between a rock and a layer of Chinese land, er, space mines. She has foot cancer, and sends him epic love letters that are published in the New York Times — which conveniently has the option of a war-free edition.

The story opens the day that our hero meets Perkus Tooth, a whacked out former artist turned rock critic with a wonky eye. Perkus Tooth serves as a cultural tutor for Chase, feeding him music, movies, dope, and his wild drooling theories about Marlon Brando or the font used in The New Yorker. These two are the foundation for a sort of Seinfeldian circle of friends: In walks a ghostwriter named Oona Lazslo, who rocks Chase Insteadman’s world — if not just his bed; Richard Abneg, who is a low-level fixer for the mayor, and his bird-like mate Georgina Hawkmannaji (AKA “Hawkman”).

This crowd orbits a small part of the Upper East Side and becomes entrenched in a mystery surrounding beautiful artifacts called chaldrons, rare vase-like pieces for which the group is constantly out-bid on eBay.

Chronic City is a doozy with some really crazy writing that left my jaw unhinged. It has thick, wordy sentences that are so visual. It also has rabid rants that require holding onto a railing to navigate. Mostly it is a really fantastic stroll through a world that is familiar, and just left of familiar. It doesn’t so much end, as just slow and then stop — which is fine in this case.

Mostly, I love this description of Oona Lazslo:

She wore black … making her like a marker scribble, a silhouette in spastic motion in that cramped kitchen. … Black hair, too, in bangs and a neat bob. Had Perkus spilled a pot of coffee on his tiles and the coffee sprung to life as a woman an instant before I had opened the door, it would have explained her perfectly.”