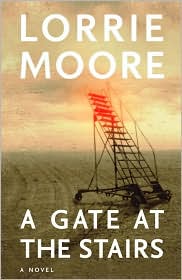 Lorrie Moore’s novel A Gate at the Stairs falls into that tricky category of just-North-of-good — a gray area that I struggle to write reasonable sentences about. When it comes to me, a blank page, and a blinking cursor, I prefer to hate something or want to roll naked in a meadow with it, to things that are just pretty good. Honestly, I’ve put off writing about this book for more than two weeks, letting it simmer, giving it far more consideration than 99 percent of the other books I read, hoping for some sort of sauce reduction that would leave behind a chunky stew of ideas instead of a soupy mess.

FACT: Not only do I love Lorrie Moore, I am — according to cultural standards –? supposed to like Lorrie Moore by virtue of being a person who reads a lot of books and frequently constructs sentences. I think puns rule, I think she’s quietly hilarious, and I think she has 20/20 vision when it comes to the details of the world. Get a load of this bit: “I sat in my apartment with the most inane sorts of magazines, all left there by Murph, which read with an avidity and dementia typically brought on by hair salons and winter.” Like.

RESPONSE: I swaddled this novel, loved it, caressed it, stared at the cover, traced the author’s name with my finger like it was Braille or I was a stalker, read it slowly and thoughtfully.

This one is a year in the life of Tassie, a young college girl — a farm girl suddenly exposed to Chinese food — who is looking for a little reinvention and a part time job. She signs on to nanny for a couple that hasn’t quite adopted yet, and is undergoing the final interview stages with various knocked-up teen-aged girls.

Sarah Brink, a busy and moody chef/restaurant owner and her absent-ish husband eventually adopt a biracial toddler, which almost immediately requires that the new mother hold support group meetings in her living room, wine-fused conversations about racism with a handful of parents.

Tassie takes up with a Brazilian — she thinks — boy from one of her classes and spends rabid naked afternoons with him, filled with “I love yous” that she doles out, but does not get in return. She buys a motorized scooter, plays bass in her living room, misses her roommate, who has disappeared into the blankets of a new boyfriend, and puts off responding to her brother’s e-mails.

Then, all of a sudden, loads start dropping on Tassie. These are unexpected bits of yowch. I was bawling without even realizing I’d started to cry. Kudos, Moore.

But! I had a hard time understanding exactly who Tassie is, what motivates her, and why what doesn’t motivate her doesn’t motivate her. She wasn’t a character I could nail down in any concrete way. And the story just isn’t sticking to my ribs the way I wish it was. ‘Just pretty good’ on Moore just doesn’t seem to be enough.