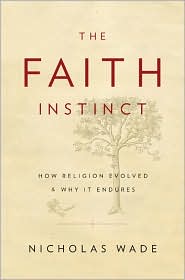 Religion evolution seems to be the latest trend in the world of intellectuals, seculars, and atheists trying to model religion into something logical. These new trendsetters, offering a softer, yet still intellectual examination of religion's roots and evolution over the ages, seem to have replaced the angry atheists led by Richard Dawkins and Sam Harris. Though their exact motives vary, the evolutionists all want to show that religion is not an immovable object but something shaped to suit the needs of a particular people in a given culture & time. I believe they are showing this evolution as a way to counteract fundamentalist tendencies. Robert Wright's?The Evolution of God is an example of the evolution trend, in my?opinion.

Nicholas Wade's?The Faith Instinct is the latest book to address religion evolution. Wade attempts to help readers understand religion from an evolutionary perspective while attempting to be balanced to both religion and science. Unfortunately, Wade failed at balancing both.

When one is undertaking the massive explanation of how religion has evolved & why it endures, one would do well to consider religions outside the Abrahamic faiths. Wade, like Wright's book above, failed to step outside of monotheism. Though Wade cherry picked certain cultures and religions to bolster his evolutionary claim, Wade failed to integrate the contributions of two major world religions: Hinduism and Buddhism. Given the large numbers of adherents in both religions, it is poor scholarship to claim an understanding about something as important as religion's evolution and not even have all of the data available.

What becomes more disturbing than Wade's choice to ignore non-monotheistic religions is the intellectual pulpit from which he preaches. Here is a good example.

All that is known is that by 50,000 years ago, the date that modern humans dispersed from Africa, all the elements of religious behavior were in place and were inherited by all descendants of ancestral population. (p. 76)

Pretty lofty claim, eh? This is typical of scientists, especially Western anthropologists, to issue edicts like this to the hungry masses that want neat and logical explanations of evolution. Unfortunately, Wade's claim ignores alternative explanations. Consider a creation story told by many Lakota who believe their people emerged from a hole in the Earth located on the southern edge of the Black Hills. Wade's paintbrush ignored this in true Bering Strait Theory fashion and simply put forth the intellectual version as truth.

Here are some other interesting claims.

Hunter gatherer societies are organized on a very different principle-they are completely egalitarian. It was during the transition from male dominance to egalitarianism that religious behavior emerged. (p. 39)

I must have missed the time when male dominance ended and egalitarianism began. Wade might want to take another look at history, especially when it concerns issues of gender.

Roman Catholic faith revolves around the sacraments, which are rituals that spiritually connect the believer to Jesus Christ. Wade fails to see this basic fact, which makes any evolutionary claims by him suspect. Wade's bias toward intellectualism and Western science blind him to not only to spirituality-a subject not considered in this book-but to multiple ways of knowing.

Wade would like the Western view of science and evolution to be the only correct way of knowing. In a world already too full of Western intellectual colonialism, Wade's book is an unfortunate & unnecessary addition.