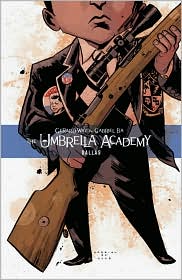 When we last left The Umbrella Academy the gang were saving the world from their sister, The White Violin, run amok. Now the Emo Family Robinson is back in The Umbrella Academy: Dallas trying to recover from the fallout of their shattered family and saving the world, again. Damn world, why can’t it just stay saved? I hope the world continues to be in constant peril because I want more and more and more of the Emo Family Robinson.

This volume finds the family in shambles (again) Kraken’s trying to fight crime; Spaceboy’s drowning his sorrows in milk, cookies, and bad TV; Rumor’s pissed off that Vanya took her voice even though Vanya’s gone a little crazy; Seance is getting manicures; and The boy’s betting on the dogs and massacring an army of time-traveling assassins.

How can you not love this family?

Of course, while each sibling is trying to deal with their personal demons the world decides to get into jeopardy again, only this time it’s kind of The Boy’s fault. Seems while spending most of his life flitting through time he kind of fucked up some stuff, specifically the assassination of JFK.

Carmichael (who appears as a man with a fish tank and fish for a head), the boss of history and time travel, dispatches Hazel and Cha-cha two of his best assassins to go get The Boy so he can set things right. Hazel and Cha-cha are easily two of the creepiest killers ever. They’re drawn here as men in suits who wear giant, cartoon like masks. Scary.

So yeah, there’s tons of mayhem and time travel, a little bit of what the fuck is going on here, and great gobs of ‘oh I hope they write about that later.’ The scenes of the family coming together in 1963 Dallas are awesome. In these scenes the words are doing as much work as the art (which isn’t often the case in this book, because the art is so powerful), and that’s magic.

Generally, I’m kind of apathetic to the whole superhero genre. I like a good Superman story as much as the next person, but most superheroes have 50+ years of history to catch up on. Oftentimes, when I read superhero books I feel like I’m only getting half the story because sometime in 1948 Superman tripped over Lois’ high heel and broke a fingernail, and by not knowing this I’m somehow missing out on a significant piece of the modern story.

But with The Umbrella Academy, I feel like I got in on the ground floor, and that’s a heady trip. I can’t wait for the next emo adventure.