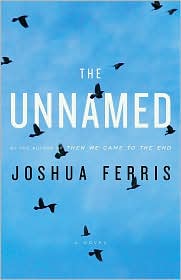 In The Unnamed, Joshua Ferris invents a disease that can’t be defined as physical or psychological. It’s a something-or-other that sends Tim Farnsworth walking at inopportune moments. Something grabs a hold of his body, and he just goes without slowing for anything that gets in his path until finally, exhausted, he stops behind a gas station or in a park or in an abandoned vehicle and sleeps. Then he calls his wife, she picks him up and brings him home, and they wait for the compulsion to strike again.

Ferris’s second novel opens with Tim going into his third go-round with the illness. Doctors can’t explain why he does what he does. He’s been drugged, bound, and scanned without answers. He and his wife have come up with some ways to lessen the effects. When he is in the throes of the illness, he sleeps in winter clothes and wears a survival pack even when he is at work as a lawyer.

The Unnamed is completely stripped of humor, the one thing Ferris did well in his debut novel Then We Came to the End.? No touch of irony, not even a whimsical description. Obviously the subject matter is weighty, but it’s like he set out to write this thing but first chucked his best, if not only, tool.

There is also this weird side plot involving a murder case. At one point it seems like Matt Damon might bust out some “Bourne Identity” karate all over the story, but that plot line never goes anywhere. It just dissolves. It’s like Ferris brought a girl home from the bar, they did gymnastics all over the apartment, and she left behind a sock. So this sock sits in the middle of the kitchen for a few days. You’re like “Hey, Ferris. What are you going to do about that sock?” He shrugs and just leaves it there, until he doesn’t even notice it anymore. Is it still sitting there? Who knows.

I’ll throw Ferris a bone. The parts about Tim and his daughter Becka are touching. The surly, overweight teen doesn’t really understand what her father is going through until he is put in her charge as her summer job. They spend their days watching “Buffy,” and eventually she gets a taste of following him to the outer reaches of his walks. This stuff doesn’t suck at all.

Here’s the thing: Joshua Ferris is not a good writer. He just simply isn’t. He has some pretty grand ideas. His first novel had a nameless narrator and was written in first person plural. Whoa. Aiming for the fences, hitting a double. This one has an important theme, what it is like to live with an undiagnosable illness and what it is like to live with someone who has an undiagnosable illness. The body split in two between letting the illness lead, or letting the self lead. The metallic taste of a gun in a mouth: Can a person live like this? Or would it be better to not live at all. Clever, thinky stuff. But he should hire someone else to put it on paper.