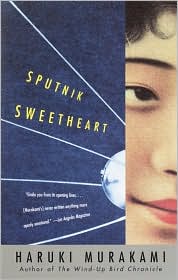 I have an important announcement: Henceforth, when I refer to “my favorite writer” I will be talking about Haruki Murakami. He has been promoted, and no longer must defer to Mr. McInerney, Mr. Easton Ellis, Mr. Fitzgerald, or Hemingway. (Mr. Palahniuk, of course, plummeted with his 2008 sketch of the pornographic film industry Snuff.) This means that if two of these authors show up on the floor next to my bed, right of way goes to Murakami. This also means that if ever again in my life I am asked what bar I’d take my favorite writer to if he came to town, I’ll have a new author and a new bar.

(I’m still not sure why none of my super-favorite writers are women, but we’ll address that another time).

It is Murakami’s Sputnik Sweatheart, just a mote of a novel, that pushed me over the edge.

An unnamed narrator is in unrequited love with Sumire, a messy girl in mismatched socks and an over-sized herringbone jacket, whom the narrator (once in the novel referred to as “K”) meets in college. Sumire’s dream is to be a novelist, and she drops out of school to read more, write more, take long walks, and call K from a phone booth at 3 a.m. with questions like: “What is the difference between a sign and a symbol?”

Then, suddenly, the otherwise nonsexual Sumire falls in love with an older married woman named Miu, whom she meets at a wedding. (This moment is punctuated with meteorological metaphors). Sumire starts working for Miu, first part time, then full time. She quits smoking, she quits writing, she learns Italian, acquires a much better wardrobe, and the two women travel to Italy together. Sumire is a mess of throbbing loins; Miu is as nonsexual as the former version of Sumire.

K, who reveals little about himself beyond his feelings for Sumire and that he is a teacher, gets a phone call in the middle of the night. Miu asks him to come to Greece because something has happened to Sumire. She’s disappeared like a puff of smoke. Dun dun duh.

The thing with Murakami is his simple, quiet voice, and the way that it just lulls, like someone whispering a bedtime story. He makes such fantastic images, and his plots don’t adhere to any sort of boundaries, like dreams. If Murakami wants a character to fly, he’ll fly without any sort of further explanation on said flight. I’m not always sold on bending reality in fiction, but Murakami makes a case for it.

A very important thing happened while I was reading this book. For years I have been struggling with the perfect metaphor for when things are just not quite right, a little out of sorts. The old “round peg, square hole” cliche, or more recently I’ve used something about unaligned cogs. Gag. As soon as I read this, I saw that I had been forever trumped:

The scene: K’s phone has just woken him from a deep sleep.

” … reality was one step out of line, a cardigan with the buttons done up wrong.”