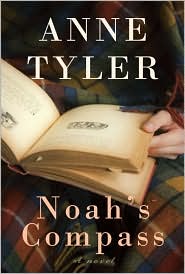 Anne Tyler’s 18th novel Noah’s Compass is more twee than Zooey Dechanel wrapped in the orange and brown tones of a home-knit afghan.

It starts in a good place: 60-year-old Liam Pennywise, once widowed, once divorced, a philosopher-turned-elementary-school teacher has been laid off from his job at a mediocre school. He begins downsizing an already modest life by moving into an apartment complex off the highway near the mall. He goes to bed his first night in his new home, and wakes up the next day in the hospital with his head bandaged and a bite mark on his hand. He is told that an intruder walked in an unlocked door in the night, there was a struggle, the neighbors heard the ruckus and called the five-oh. Liam can’t recall a lick of what happened. While none of his belongings were taken, he feels like a chunk of his life has been stolen from him.

A flock of clucky women orbit Liam’s world at the farthest reaches of his solar system: his high-school aged daughter Kitty, his sister Julia who can’t be bothered to remember that Liam doesn’t eat red meat, his bible-banger daughter Louise, his white-flabby thighed ex-wife Barbara, and eventually, the frumpy and socially awkward Eunice. Aside from Kitty, who is sparring with her mother and wants to live with Liam instead, these women are all disapproving of Liam’s hapless wardrobe and the way his existence is becoming more and more muted. They have grudge bags teeming with his failings, while he maintains a sort of shrugging inability to understand any of them.

Liam is introduced to Eunice in the waiting room of a neurosurgeon’s office. She is working as a “rememberer” for a local billionaire, whispering into the old man’s ear the details that he is embarrassed to be unable to recall — like that the receptionist’s name is “Verity.” Although Liam knows a rememberer won’t be able to tell him what happened the night of the attack in his apartment, he gets hopped up on the idea that he could have an assistant like that, keeping track of his existence and reminding him of the details. He stalks Eunice, and eventually officially meets the 38-year-old disheveled woman with questionable choice in accessories. They develop first and briefly a friendship, which eventually turns into a very chaste love affair.

Meh. I’m not buying it. It’s a pretty flimsy thread and some naive brainwork that brings these two together in his living room. What passes for intimacy is Liam sitting on the arm of her chair. The simple See-Dick-Run language, and the Skip-Jane-Skip sentimentality is just too precious to be taken seriously. When their relationship reveals a particularly brutal bit of rot, neither character’s actions seem realistic. It’s all just words on a page with no feeling. Like servers at the Olive Garden singing Happy Birthday to a stranger.

There are parts where cutesy works a little bit. Liam’s daughter Kitty and her alleged druggie boyfriend add good color to an otherwise beige story. Liam’s grandson’s fresh perspective on bible stories is cute-ish, a nice break from the blunt force of being smothered in an avalanche of stuffed animals.