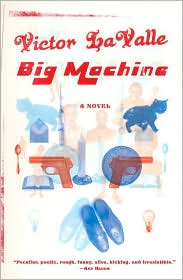 Maybe you just broke up with your boyfriend. Maybe you haven’t had a boyfriend in, like, eons. Along comes this guy: good lookingish, sorta funny, kinda interesting. People you like also like him. You shrug and give him a whirl. You just cannot catch the fever, though. There is something off. Cogs that don’t match up or something. Trying to cram a square peg into a round hole. He becomes a placeholder. Someone to sit next to in relationship’s waiting room.

That, for me, was what it was like to read Victor LaValle’s Big Machine. It took me months to read; I just couldn’t commit to it. I probably ditched it in favor of finishing about six other books in the process.

It’s not cheating if you aren’t actually read-reading it, right?

Recovering addict Ricky Rice is scrubbing bathrooms in Grand Central Station when he is summoned to make good on a promise he made years ago while he was all whacked out in Iowa. He travels to Vermont, where he becomes part of the incoming class of Unlikely Scholars. This collection of former thieves, thugs, and prosties are given a living space, a fancy schmancy wardrobe, a food allowance, and spend 9-5 p.m. reading newspapers for evidence of paranormal activity. This group has a long history and it’s own biblical creation story. Ricky Rice quickly moves up the ranks, and is given a special assignment: Go to Los Angeles and thwart an Unlikely Scholar who has gone rogue. He is accompanied by one of the Unlikely Scholar’s shining stars, a mysterious functioning alcoholic named Adele Henry.

At some point, Ricky Rice is impregnated while traipsing through a sewer.? In the meantime, he meets Solomon Clay — the aforementioned Unlikely Scholar who is starting his own faction filled with suicide bombers.

Ricky Rice is also flashing back on his former life. He grew up as part of a cult led by the Washerwomen. His parents spent time on the road, spreading the word. This dangerous crew of fanatics is infiltrated by the NYPD, there is an inner cult blood bath, his sister takes a bullet to the noggin. Ricky Rice became a bad man who ends up in a bad situation, left to starve to death and combat withdrawl in a basement in Iowa where feral cats are snacking on his former cult-mate.

He escapes, and that is when he experiences The Voice — the paranormal phenomenon that gives him entry into the Unlikely Scholars. (These flashbacks are the better part of the story. Gritty and gripping.)