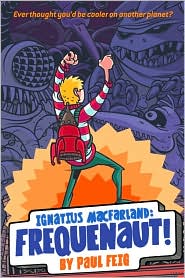 I’ve been a big fan of Paul Feig’s since 1999 and I didn’t know it until the summer of 2008. If you loved the short-lived TV show “Freaks & Geeks,” since Feig created it, you’ve been a big fan, too. If you didn’t like “Freaks & Geeks” (we can’t be friends), you’ve probably seen episodes of “Arrested Development,” “The Office,” and “Weeds” that Feig has directed.

In the summer of 2008, walking through the hundreds of vendor booths at the American Library Association Conference, I heard someone promoting a new book scream, “It’s from the creator of ‘Freaks & Geeks’!” I didn’t know who created “Freaks & Geeks” and I didn’t know what book they were promoting, but I had to get in line.

Meeting Feig that day, I know I acted like a fanatic moron before I walked away with my signed copy of Feig’s children’s novel, Ignatius MacFarland, Frequenaut! On the back of the book there were statements about his two earlier books, so I bought and read those memoirs first. They were hilarious and it’s easy to see that “Freaks & Geeks” was inspired, in part, by his life. He’s a fellow geek.

It should come as no surprise that the hero in this book, middle schooler Ignatius (or Iggy) MacFarland, is also a fellow geek. Sick of being teased, Iggy actually feels so out of place in this world that he sits on his rooftop at night hoping aliens will come snatch him.

Since aliens seem to be bypassing his house, Iggy decides to take matters into his own hands. Using trash cans, duct tape, and gunpowder taken from tons of fireworks, Iggy and his friends create a makeshift rocket. When they test the rocket, after the loud explosion and tons of smoke, Iggy crawls out of it expecting to see his house and friends, but instead he sees nothing but grass and weird looking trees. He was still on Earth but had jumped frequencies.

In this other frequency, animals are huge, strange, and can speak English, and they’re being ruled by an evil dictator, an English teacher from Iggy’s hometown. The dictator doesn’t like other humans in the frequency, so throughout the novel Iggy is chased by the dictator’s army.

Ignatius MacFarland, Frequenaut! is part science fiction and part fantasy, and I wanted to absolutely love it, but I only liked it. There is a lot of action throughout the book, but during it, Iggy thinks too much. We are in Iggy’s mind and are constantly told stories from his past that relate to what he’s doing at the moment. The side stories are funny and witty, and at times fit in with what he’s doing, but sometimes they just take away from the action at hand. I still enjoyed the book, and I will be reading the sequels that are in the works, but I hope Feig does more editing in them than he did in this one.