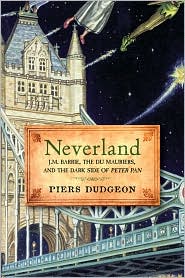 I first got interested in J.M Barrie’s involvement with the DuMaurier family after I learned Daphne DuMaurier’s (the famous novelist of Rebecca among others) cousins were the boys Peter Pan was based on. I got more intrigued when I found out Peter’s namesake, Pete Llewelyn Davies, killed himself by jumping in front of a train at the age of sixty-three.

This is just the beginning of the mysteries and tragedies weaving through Barrie’s life with DuMauriers. There are so many strange things that happened to them – George at twenty-one committed suicide by drowning, Daphne’s incestuous relationship with her father, Barrie’s pedophiliac interest in the boys – that any of these would make for a good book.

Dudgeon touches on all these points and more, but it’s obvious he has an agenda. He believes Barrie learned hypnotism and mind control from the elder George DuMaurier, who goes by the name “Kicky” for most of the book. He suggests Barrie manipulated an entire generation of DuMauriers to his advantage. Very interesting, but I’m not sure I buy it completely.

Dudgeon also does some detective work. A tragedy that occurred early on in Barrie’s life effected him negatively – the death of his younger brother David in a mysterious skating accident. It had been previously assumed that Barrie was told of the accident but was not present. Dudgeon discovered inconsistencies in reports concerning David’s death. Based on the evidence he uncovers, he concludes Barrie was actually the cause of David’s death, which explains Barrie’s strange relationship with his mother and women in general.

With all this drama to work with, Neverland still comes out a little dry. I didn’t enjoy all the history about hypnosis and there was too much about Kicky and his life that bored me. I do understand this was all needed to support Dudgeon’s mind control theory.

If you’re looking for a book that glorifies J.M. Barrie, stay away from this one. If you loved the movie “Finding Neverland” this will ruin it for you forever. But, if you’re like me and this DuMaurier/Barrie story fascinates and disturbs, read it!