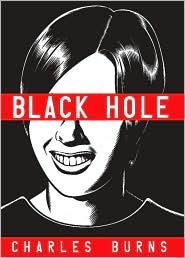 When I finished reading all 368 pages of Charles Burns’ graphic novel Black Hole the first thing I thought was, well that three hours would have been better spent listening to Black Hole Sun on repeat.

One again one of the High Holies of the graphic novel realm has left me disappointed. The High Holies, at least in my mind, are the canon of the graphic novel world. The books everyone points to as the best, most influential of the medium. This is a list that I mostly keep in my head and includes the likes of Jimmy Corrigan the Smartest Kid on Earth, Sandman, Watchmen, Maus, Black Hole, Batman: The Dark Knight Returns, Persepolis, and Ghost World. So far I’ve read six of them and only two of them have lived up to the accolades heaped upon them (Persepolis and Maus).

I’m convinced the only read Black Hole receives any acclaim at all is because of the amazing art and the boobies, because the story is crap. That’s right, I said crap.

Black Hole takes place in Seattle during the mid-70s a place where a small band of teenagers have come down with the Bug, a disfiguring sexually transmitted disease. Some victims have boils on their face, others have faces that have turned into a stony mask, and one, Rob the dreamy heartthrob, has sprouted a tiny mouth that the base of his threat. Some have the Bug worse than others. Some of the afflicted can pass in normal society and others are forced to set up a sort of hobo camp in the woods near a park.

This premise, on its own is really interesting but it doesn’t go anywhere. I was hoping for a sort of twisted, dark comedy where kids were longing to get the Bug because it proved their sexual prowess. I was picturing some sad, slut-shaming because girls aren’t supposed to have sex but boys are.

Sadly, it doesn’t go anywhere like that. The book devolves into a Dazed and Confused/That 70’s Showesque sort of stoner and sex romp that’s kind of boring. Reading about teenage boys trying to score (either drugs, booze, or pussy) is a drag. Acid trips, much like dreams (both of which feature prominently in this book) are significant only to the tripper/dreamer. To the outside observer, it’s just a bunch of weird nonsense with no real significance.

There’s some melodrama thrown in with two star-crossed lovers forced to runaway to the hobo camp and an inexplicable series of murders that kind of pop up out of nowhere.

It’s such a disappointment because the art here really is stunning. Rendered only in black and white the art gives the book a kind of creepy and foreboding tone that is sort of at odds with the story. None of it seems to mesh very well together.

Black Hole is the kind of book that proves my theory that just because you’re a wonderful artist doesn’t mean you’re a great writer (see into to Essex County review).